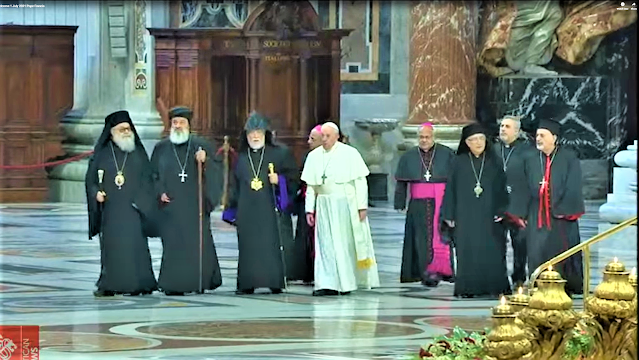 Lebanon’s Christian leaders gathered at the Vatican with Pope Francis in prayer for the nation.
Vatican News reports that 10 senior leaders of the various Christian Churches and communities of Lebanon, along with their delegations, have arrived in the Vatican for a day of prayer and reflection with Pope Francis, on the current situation of the troubled Middle Eastern nation and its future, and to implore for the gift of peace and stability.
Lebanon, a Mediterranean nation of 5 million, has the largest percentage of Christians in the Middle East and is the only Arab country with a Christian head of state, President Aoun. Christians make up a third of the population.
A massive explosion on 4 August 2020 at a fertilizer storage facility in Beirut port tore through the city and reopened the country’s old wounds.  The blast killed at least 190 people, injured over 6,000, caused over US$10 billion in property damage, and left some 300,000 people homeless.
The Lebanese pound has lost more than 90% of its value against the US dollar since 2019 and inflation has skyrocketed, wiping out people's wages and causing food prices to triple. Half of the population is believed to be living below the poverty line.

The July 1 Day of Prayer and Reflection for Lebanon, called by Pope Francis,  is to help revive hope and peace in the country.
Inside, standing in front of the papal altar, which stands just above the tomb of St. Peter, the Pope intoned the Our Father prayer, which others joined in Arabic.  After a moment of silent prayer, the Pope went down the steps to the tomb of St. Peter in the crypt below the papal altar where he placed a lighted candle.  The others followed him placing their candles, with 10 candles in all.  After a moment of silent prayer, the Pope led them out of the basilica through the crypt.
Currently, they are holding the first of their 3 closed-door meetings of the day in Clementine Hall of the Apostolic Palace.  The day will be brought to a close with a speech by Pope Francis at 6 pm.

Pope Francis called on all men and women of goodwill to join the Day of Prayer and Reflection for Lebanon during his Sunday ‘Angelus” prayer, explaining the aim was to “pray together for the gift of peace and stability”. He urged for prayers so that Lebanon may have “a more serene future.”
Below is the list of members of the Ecumenical Council of Eastern Churches of Lebanon, who are participating in the Day of Prayer and Reflection:
1. His Beatitude Cardinal Béchara Boutros, Maronite Patriarch of Antioch and All the East
2. His Beatitude Youhanna X, Greek Orthodox Patriarch of Antiochia
3. His Holiness Ignatius Aphrem II, Syrian Orthodox Patriarch of Antioch and All the East
4. His Beatitude Youssef Absi, Patriarch of Antiochia of the Greek-Melkites
5. His Holiness Aram I, Catholicos of Cilicia of the Armenians
6. His Beatitude Mor Ignatius Youssef III, Syriac Catholic Patriarch of Antioch
7. Reverend Joseph Kassab, President of the Supreme Council of the Evangelical Community in Syria and Lebanon
9. His Excellency Michel Kassarji, Bishop of Beirut of Chaldeans
10. His Excellency César Essayan, Apostolic Vicar of Beirut of Latins
11. Cardinal Leonardo Sandri, prefect of the Congregation for Eastern Churches
12. Archbishop Joseph Spiteri, Apostolic Nuncio to Lebanon
Edited from Vatican News.va