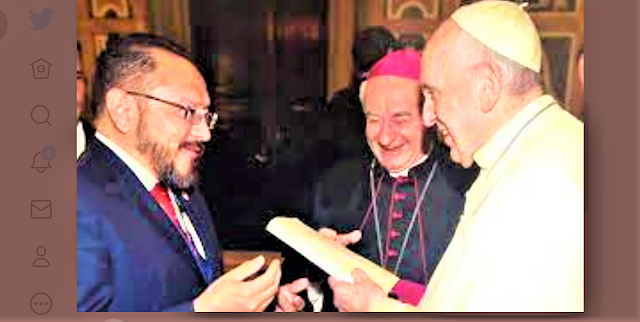 The Mexican philosopher Rodrigo Guerra López, founder of the Center for Advanced Social Research (CISAV), was appointed by Pope Francis as Secretary of the Pontifical Commission for Latin America , one of the most important positions awarded to a lay person in the structure of the Roman curia.
The Commission's purpose is the study of Catholic life in Latin America, and encouraging collaboration between the Vatican and the Latin American Bishops' Conference.
This commission was vacant since January of this year, after Dr. Guzmán Carriquiry, who held that position for a decade, was appointed as ambassador of Uruguay, his country of origin, to the Holy See.

Biography: Rodrigo Guerra López
Date of Birth 4 August 1966 Place Mexico City
Nomination 20 October 2020 Field Philosophy
Title Professor
Most important awards, prizes and academies
Rodrigo Guerra obtained a Degree in Philosophy from the Universidad Popular Autónoma del Estado de Puebla (1984-1989); Post-graduate in Humanities from Universidad Iberoamericana (1990-1991); Ph.D. in Philosophy (“Summa cum Laude”) at the Internationale Akademie für Philosophy im Fürstentum Liechtenstein (2001). He was appointed as member of the Pontifical Council for Justice and Peace (2012-2016); Corresponding member of the Pontifical Academy for Life (2006-2017); Ordinary member of the Pontifical Academy for Life (2017-); Vicepresident of FIBIP (International Federation of Institutions of Personalistic Bioethics, 2018-2020); Founder and Director of the Social Observatory at CELAM (2004-2007); Member of the Theological Commission of CELAM (2012-); Member and founder of the Karol Wojtyla Foundation (2008-); Director and founder of the Social Observatory of the Mexican Conference of Bishops (2012-); Chair of Social Philosophy at UPAEP (1989-1994); Academic Director at the John Paul II Institute for Studies on Marriage and Family, Mexico (1993-1995); Chair of Metaphysics at Universidad Panamericana (2002-2006); Chair of Anthropology and Social Philosophy at CISAV (2008-); Guest Professor at Univerzita Karlova (Prague), Pontificia Universidad Católica de Chile; Universidad Católica Argentina; Universidad Católica de Santa Fe (Argentina); International Academy of Philosophy (Chile); Universidad Iberoamericana (Mexico); Pontificia Universidad Javeriana (Bogotá); Instituto de Filosofía Edith Stein (Granada); Guest Lecturer at the “Karol Wojtyla Memorial Lectures”, Catholic University of Lublin; Member of the Scientific Board of several Academic Journals.
Summary of scientific research
Rodrigo Guerra has published research books and articles on the anthropological basis of Ethics, Bioethics and Social Philosophy since 1989. In most cases, his works develop a phenomenological foundation of classical metaphysics; an analytic and differentiated understanding of modernity and its crisis; and a personalistic understanding of social sciences. In Prof. Guerra's works it is easy to discover the influence of Thomas Aquinas, Dietrich von Hildebrand, Karol Wojtyla, Augusto Del Noce, Alberto Methol-Ferré, Rocco Buttiglione, Massimo Borghesi, Juan Carlos Scannone, and the Latin American tradition in social sciences and theology. With these premises he has explored topics like ethics of international debt; Catholic Social Doctrine and politics; pre-political foundations of contemporary democracy; problems and limits of neo-populism; anthropological foundations of “Family perspective”; dignity of the human person as foundation of human rights; a critical and personalistic understanding of gender and human sexuality, etc.
Source: http://www.pass.va/content/scienzesociali/en/academicians/ordinary/guerra_lopez.html