Saint July 25 : St. James the Greater the Apostle and Patron of Veterinarians, Pharmacists and Compostela in Spain - 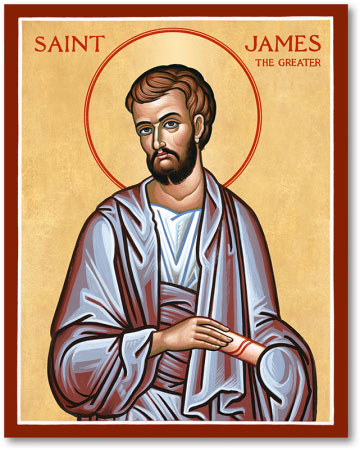 APOSTLE AND PATRON SAINT OF SPAIN
Feast: July 25
Feast Day:
July 25
Born: 1st century
Died:
44, Judea
Major Shrine:
Cathedral of Santiago de Compostela, Galicia (Spain)
Patron of:
Veterinarians, equestrians, furriers, tanners, pharmacists
SEE ALSO:
Powerful Prayers to #StJames the Greater - #Novena to Saint James
https://www.catholicnewsworld.com/2021/07/powerful-prayers-to-st-james-greater.html
The son of Zebedee (q.v.) and Salome (q.v. Cf. Matt., xvii, 56; Mark, xv, 40; xvi, 1). Zahn asserts that Salome was the daughter of a priest. James is styled "the Greater" to distinguish him from the Apostle James "the Less," who was probably shorter of stature. We know nothing of St. James's early life. He was the brother of John, the beloved disciple, and probably the elder of the two. His parents seem to have been people of means as appears from the following facts. Zebedee was a fisherman of the Lake of Galilee, who probably lived in or near Bethsaida (John, 1, 44), perhaps in Capharnaum; and had some boatmen or hired men as his usual attendants (Mark, 1, 20). Salome was one of the pious women who afterwards followed Christ and "ministered unto him of their substance" (cf. Matt., xxvii, 55, sq.; Mark, xv, 40; xvi, 1; Luke, viii, 2 sq.; xxiii, 55-xxiv, 1). St. John was personally known to the high-priest (John, xviii, 16); and must have had wherewithal to provide for the Mother of Jesus (John, xix, 27). It is probable, according to Acts, iv, 13, that John (and consequently his brother James) had not received the technical training of the rabbinical schools; in this sense they were unlearned and without any official position among the Jews. But, according to the social rank of their parents, they must have been men of ordinary education, in the common walks of Jewish life. They had frequent opportunity of coming in contact with Greek life and language, which were already widely spread along the shores of the Galilean Sea. Some authors, comparing John, xix, 25, with Matt., xxviii, 56, and Mark, xv, 40, identify, and probably rightly so, Mary the Mother of James the Less and of Joseph in Mark and Matthew with "Mary of Cleophas" in John. As the name of Mary Magdalen occurs in the three lists, they identify further Salome in Mark with "the mother of the sons of Zebedee" in Matthew; finally they identify Salome with "his mother's sister" in John. They suppose, for this last identification, that four women are designated by John, xix, 25; the Syriac "Peshito" gives the reading: "His mother and his mother's sister, and Mary of Cleophas and Mary Magdalen." If this last supposition is right, Salome was a sister of the Blessed Virgin Mary, and James the Greater and John were first cousins of the Lord; this may explain the discipleship of the two brothers, Salome's request and their own claim to the first position in His kingdom, and His commendation of the Blessed Virgin to her own nephew. But it is doubtful whether the Greek admits of this construction without the addition or the omission of kai (and). Thus the relationship of St. James to Jesus remains doubtful.