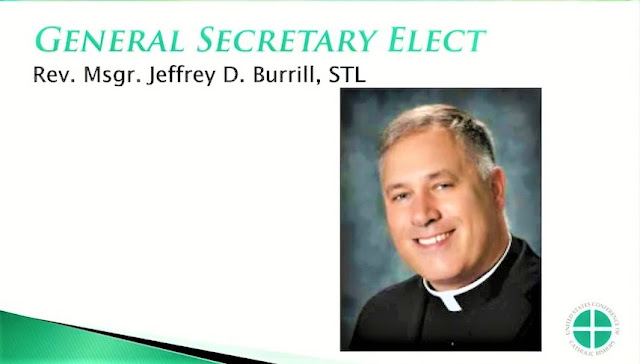 Statement on USCCB General Secretary
WASHINGTON - On Monday, the U.S. Conference of Catholic Bishops became aware of impending media reports alleging possible improper behavior by its general secretary, Monsignor Jeffrey Burrill.
What was shared with us did not include allegations of misconduct with minors. However, in order to avoid becoming a distraction to the operations and ongoing work of the Conference, Monsignor Burrill has resigned, effective immediately.
The Conference takes all allegations of misconduct seriously and will pursue all appropriate steps to address them.
### Source: USCCB
Biography of Msgr. Burrill from the USCCB:
Rev. Msgr. Jeffrey D. Burrill, S.T.L., was elected USCCB General Secretary by the body of bishops on November 16, 2020.  He succeeds Msgr. J. Brian Bransfield, who served in the role for five years.  Prior to his election as General Secretary, Msgr. Burrill served as a USCCB Associate General Secretary since February 2016.
The USCCB General Secretary coordinates all administrative matters of the Conference, and is responsible for the coordination of the work of the Conference Committees and staff. He likewise directs and coordinates the planning and operational activities of the various secretariats and offices in support of the work of the Conference.
Msgr. Burrill is a priest of the Diocese of La Crosse, Wisconsin, where he served as pastor of St. Bronislava Church from 2013-2016. Previously, he served at the Pontifical North American College in Rome from 2009-2013, first as director of apostolic formation and then as the Carl J. Peter chair of homiletics, formation advisor, and director of media relations. He was pastor of the tri-parishes of St. Mary's, Durand, Holy Rosary, Lima, and Sacred Heart of Jesus in Mondovi, Wisconsin, from 2001 through 2009. He taught and served as chaplain at Regis High School and Middle School in Eau Claire, Wisconsin, from 1999 to 2001.
Msgr. Burrill earned a bachelor of arts degree from Saint Mary's College Immaculate Heart of Mary Seminary in Winona, Minnesota, in 1994; a bachelor of sacred theology from the Gregorian University in Rome in 1997; and a licentiate in ecumenical theology from the Angelicum University, also in Rome, in 1999. He was ordained to the priesthood in 1998 in the Diocese of La Crosse. He served in several leadership positions for the diocese, including six years as a regional vicar and two terms on the Diocesan Presbyteral Council. Msgr. Burrill also served as the ecumenical officer and as a member of the seminary admissions board.