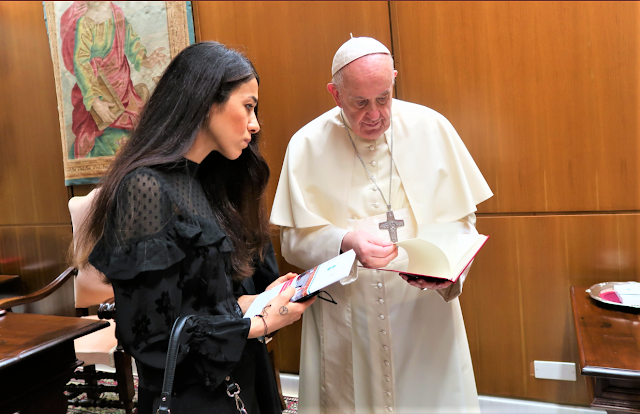 Pope Francis met with Nadia Murad for the 3rd time at the Vatican. Nadia is the Nobel Peace Prize winner of 2018. In the past, Francesco said he wanted to visit Iraq after reading the book by Nadia Murad, in which the young woman retraced the kidnapping by ISIS in 2014.

"I thank the Pope for welcoming me once again to the Vatican". So the young Nobel Peace Prize winner, Nadia Murad, on twitter following the meeting in the Vatican with Francis. "We discussed - she adds - the importance of supporting the Yazidis and other minorities in Iraq. In light of the tragic events in Afghanistan, we discussed the need to defend women and survivors of sexual violence".

In 2014 Nadia Murad,  was kidnapped and held hostage by the Islamic State. In her attack on her Yazidi village she lost her six brothers and her mother. For three months she was abused and enslaved then with the escape she regained her freedom, moving to Germany and starting her important social movement. Since September 2016, she has become a UN Ambassador for the dignity of survivors of trafficking in human beings and in 2018 she received the Nobel Peace Prize then she founded Nadia's Initiative, an organization to help women victims of violence. In February 2021, she buried the remains of two of her siblings in Kocho's hometown.

On Thursday, together with her husband, Nadia Murad met Pope Francis. This is the third time after the participation of the Nobel Peace Prize winner at the general audience on May 3, 2017 and after the private meeting on December 20, 2018, on this last occasion Murad gave the Pope her autobiographical book "L 'last girl', centered on the terrible experience in the hands of ISIS.

"I am happy that my story stayed with him and that he felt called to bring this message to Iraq." said Nadia in an interview with Vatican News in which she recalled how the defense of the cause of the Yazidis by Pope Francis is "an example for the other religious leaders of the region to amplify the message of tolerance towards religious minorities such as the Yazidis".

Nadia explained : "You are not alone". More than a third of women around the world are subjected to sexual violence. This does not mean that we have to accept it. There are women in every community who survive, oppose and denounce. When we unite to fight for our rights, change becomes unstoppable.