Simone Biles, the Olympic gymnast revealed that she is “pro-choice.” Biles responded to a person commenting on her Instagram account on Tuesday, August 10th, 2021; “I already know this is going to start the biggest argument & may even lose followers BUT I’m very much pro-choice.”
A famous pro-life activist, namged Obianuju Ekeocha, from Nigeria, Africa, answered Simone's comments on Twitter:
It is always heartbreaking when people widely celebrated by Christians as admirable role models, come out in support of abortion.
So many Catholics celebrated Simone Biles,who went through foster care system. Today she described herself as “pro-choice”. Very sad & unfortunate. pic.twitter.com/qgvJGxvoZ1
— Obianuju Ekeocha (@obianuju) August 10, 2021 (see pic. below) 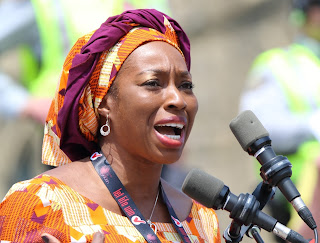 Simone Biles, age 24, is the most decorated American gymnast, with more than 30 Olympic and World Championship medals to her name. Biles has suffered in her life, after being taken away from her mother and placed in the foster care system only later to be adopted by her grandparents. Then she suffered sexual abuse from the former USA Gymnastics team doctor Larry Nassar.
Biles was born on March 14, 1997, in Columbus, Ohio, the third of four siblings. Her birth mother, Shanon Biles, was unable to care for her children — Adria, Ashley, and Tevin. The four went into  foster care. In 2003, Biles’ maternal grandfather, Ron Biles, and his wife, Nellie Biles, officially adopted Simone and her younger sister Adria. Ron’s sister, Harriet, adopted the two oldest children. On Tuesday, Biles clarified on Twitter that she does not favor aborting babies as an alternative to the foster care system. “What I did imply is that you should not control someone else’s body/decision,” she said. “Let’s be real, what you care about is control.” The pro-life leader Lila Rose said of Biles’ views on abortion;

"Simone Biles just announced on Instagram that she is very “pro-choice” because “the foster care system is broken.” Incredibly sad and awful. To have overcome a broken system as triumphantly as she has— yet wish death for other kids bc they may face foster care is beyond fathoming" wrote Pro-Life activist Lila Rose on Twitter.

Fr. Frank Pavone, national director of Priests for Life,  tweeted on Tuesday that he would pray for Biles.

I will pray for Simone. She is an amazing Gymnast and a role model to millions. I will pray that she sees that Abortion is the killing on Innocent unborn living babies. #prolife #tuesdaymotivation pic.twitter.com/Gblvglp1tP

Anonymous said…
If Bile's mother had decided for abortion, there would have beeb no Bikes, gymnast, who cannot simply decide between yes or no. She is an uttetly ungrateful one for the blessings God has bestowed on her.
August 13, 2021 at 7:48 PM

Anonymous said…
It is killing Support needed for mother always helps God Bless all who help
August 13, 2021 at 9:14 PM