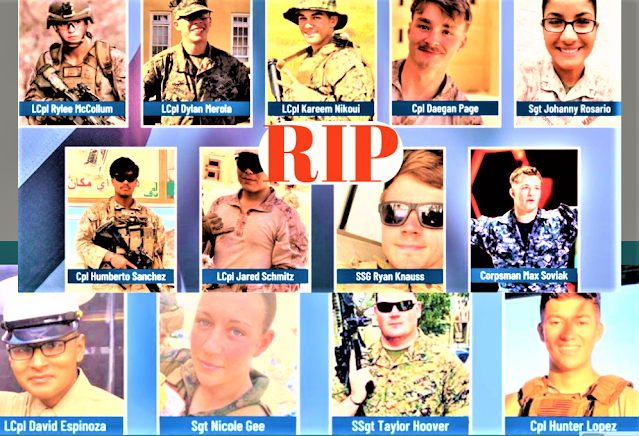 Thirteen US service members and 175 people were killed in two suicide bombing attacks outside Kabul's airport. The attacks occurred on August 26th, 2021 according to the Pentagon and Afghanistan's Ministry of Public Health.

The deadly blasts came as the United States and other Western countries race to evacuate of their citizens and Afghan allies after the Taliban takeover of the country.

An official with Afghanistan's Ministry of Public Health told CNN that 140 people were wounded.

Eighteen US service members were injured in addition to the 13 dead, said Capt. Bill Urban of US Central Command (Centcom).

The US Department of Defense released the names of the service members who were killed: (pictured above)

US President Joe Biden, speaking from the White House, called the troops "heroes" and said he was "outraged as well as heartbroken."

ISIS in Khorasan, known as ISIS-K, has claimed that an ISIS militant carried out the suicide attack, but provided no evidence to support the claim.

US officials have said the group was likely behind the attack, and Biden on Thursday announced that he had ordered US military commanders "to develop operational plans to strike ISIS-K assets, leadership and facilities."

In previous days, the President had cited the risk of a terror attack among the reasons for getting US troops out of the country by August 31. He had also promised a swift and forceful response to any disruption to the operation.

US officials have been warning over the past week that a threat of a terror attack at the airport.

Thousands of Afghans have been gathering at the airport's gates in recent days in hopes of being evacuated.

Ten Marines were among the troops killed and several more were wounded,

Please Pray for Peace in Afghanistan...