Saint August 17 : St. Hyacinth a Dominican and Patron of Poland who Died in 1257 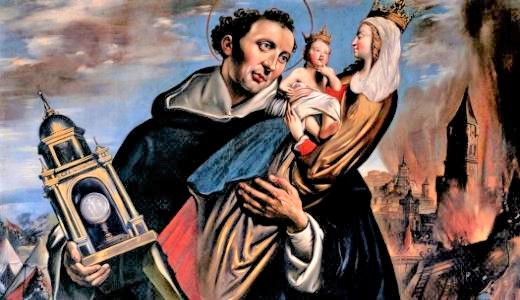 Born: 1185 at Lanka Castle, Kamin, Silesia, Poland
Died: 15 August 1257 at Krakow, Poland
Canonized: 17 April 1594 by Pope Clement VIII
Patron of: Poland
Dominican, called the Apostle of the North, son of Eustachius Konski of the noble family of Odrowaz; born 1185 at the castle of Lanka, at Kamin, in Silesia, Poland (now Prussia); died 15 August, 1257, at Cracow.
Feast, 16 Aug.
A near relative of Saint Ceslaus, he made his studies at Cracow, Prague, and Bologna, and at the latter place merited the title of Doctor of Law and Divinity. On his return to Poland he was given a prebend at Sandomir. He subsequently accompanied his uncle Ivo Konski, the Bishop of Cracow, to Rome, where he met St. Dominic, and was one of the first to receive at his hands (at Santa Sabina, 1220) the habit of the newly established Order of Friars Preachers. After his novitiate he made his religious profession, and was made superior of the little band of missionaries sent to Poland to preach. On the way he was able to establish a convent of his order at Friesach in Carinthia. In Poland the new preachers were favourably received and their sermons were productive of much good. Hyacinth founded communities at Sandomir, Cracow, and at Plocko on the Vistula in Moravia. He extended his missionary work through Prussia, Pomerania, and Lithuania; then crossing the Baltic Sea he preached in Denmark, Sweden, and Norway. He came into Lower or Red Russia, establishing a community at Lemberg and at Haletz on the Mester; proceeded into Muscovy, and founded a convent at Dieff, and came as far as the shores of the Black Sea. He then returned to Cracow, which he had made the centre of his operations. On the morning of 15 August he attended Matins and Mass, received the last sacraments, and died a saintly death. God glorified His servant by numberless miracles, the record of which fills many folio pages of the Acta SS., August, III, 309. He was canonized by Pope Clement VIII in 1594. A portion of his relics is at the Dominican church in Paris. BUTLER, Lives of the Saints;