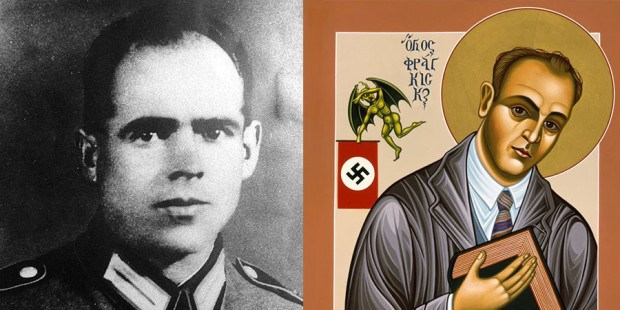 Bl. Franz Jägerstätter (1907-1943)Layman and martyr
Franz Jägerstätter was born on 20 May 1907 in St Radegund, Upper Austria, to his unmarried mother, Rosalia Huber, and to Franz Bachmeier, who was killed during World War I. After the death of his natural father, Rosalia married Heinrich Jägerstätter, who adopted Franz and gave the boy his surname of Jägerstätter in 1917.
Franz received a basic education in his village's one-room schoolhouse. His step-grandfather helped with his education and the boy became an avid reader.
It seems Franz was unruly in his younger years; he was, in fact, the first in his village to own a motorcycle. However, he is better known as an ordinary and humble Catholic who did not draw attention to himself.
After his marriage to Franziska in 1936 and their honeymoon in Rome, Franz grew in his faith but was not extreme in his piety.
Besides his farm work Franz became the local sexton in 1936 and began receiving the Eucharist daily. He was known to refuse the customary offering for his services at funerals, preferring the spiritual and corporal works of mercy over any remuneration.
In the mid to late 1930s, while much of Austria was beginning to follow the tide of Nazism, Franz became ever more rooted in his Catholic faith and placed his complete trust in God.
While carrying out his duties as husband and bread-winner for his wife and three daughters, this ordinary man began thinking deeply about obedience to legitimate authority and obedience to God, about mortal life and eternal life and about Jesus' suffering and Passion. Franz was neither a revolutionary nor part of any resistance movement, but in 1938 he was the only local citizen to vote against the "Anschluss" (annexation of Austria by Germany), because his conscience prevailed over the path of least resistance.
Franz Jägerstätter was called up for military service and sworn in on 17 June 1940. Shortly thereafter, thanks to the intervention of his mayor, he was allowed to return to the farm. Later, he was in active service from October 1940 to April 1941, until the mayor's further intervention permitted his return home.
He became convinced that participation in the war was a serious sin and decided that any future call-up had to be met with his refusal to fight.
"It is very sad", he wrote, "to hear again and again from Catholics that this war waged by Germany is perhaps not so unjust because it will wipe out Bolshevism.... But now a question: what are they fighting in this Country - Bolshevism or the Russian People?
"When our Catholic missionaries went to a pagan country to make them Christians, did they advance with machine guns and bombs in order to convert and improve them?... If adversaries wage war on another nation, they have usually invaded the country not to improve people or even perhaps to give them something, but usually to get something for themselves.... If we were merely fighting Bolshevism, these other things - minerals, oil wells or good farmland - would not be a factor".
Jägerstätter was at peace with himself despite the alarm he could have experienced witnessing the masses' capitulation to Hitler. Mesmerized by the National Socialist propaganda machine, many people knelt when Hitler made his entrance into Vienna. Catholic Churches were forced to fly the swastika flag and subjected to other abusive laws.
In February 1943 Franz was called up again for military service. He presented himself at the induction centre on 1 March 1943 and announced his refusal to fight, offering to carry out non-violent services: this was denied him.
He was held in custody at Linz in March and April, transferred to Berlin-Tegel in May and subject to trial on 6 July 1943 when he was condemned to death for sedition. The prison chaplain was struck by the man's tranquil character. On being offered the New Testament, he replied: "I am completely bound in inner union with the Lord, and any reading would only interrupt my communication with my God".
On 9 August, before being executed, Franz wrote: "If I must write... with my hands in chains, I find that much better than if my will were in chains. Neither prison nor chains nor sentence of death can rob a man of the Faith and his free will. God gives so much strength that it is possible to bear any suffering.... People worry about the obligations of conscience as they concern my wife and children.
But I cannot believe that, just because one has a wife and children, a man is free to offend God".
Franz Jägerstätter, who would not bow his head to Hitler, bowed his head to God, and the guillotine took care of the rest. He was obviously called up to serve a higher order.
SOURCE: FULL TEXT  Biography from Vatican.va
Bl. Franz's Feast Day is May 21 but August 9th is the Date of his death.