As Former Cardinal McCarrick, Age 91, Begins his Court Appearances for Abuse More Lawsuits are Filed Against Him - VIDEO 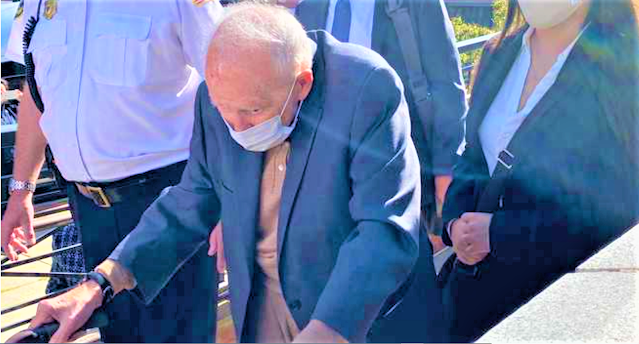 Former Cardinal Theodore E. McCarrick, age 91, arrived at Dedham District Court in Dedham, Massachusetts on Sept. 3, 2021, after being charged with molesting a 16-year-old boy during a 1974 wedding reception.

CNS reports that former Cardinal Theodore E. McCarrick pleaded not guilty Sept. 3 in a Massachusetts court, where he is facing three counts of sexually assaulting a teenager in the 1970s.

McCarrick comes into the courthouse to shouts of “rot in hell” and “plead guilty” from abuse survivors and advocates. He has no comment. #WCVB https://t.co/R4cXuxll9W pic.twitter.com/9DcDmlIwKP

He was not taken under custody but was ordered to post $5,000 bail and have no contact with the alleged victim or children. He was also was ordered not to leave the country and surrendered his passport.

His next court appearance is Oct. 28.

The day before the arraignment, a former employee and a former priest of the Archdiocese of Newark filed lawsuits alleging unpermitted sexual contact by McCarrick for incidents in 1991.

The Massachusetts case is the first time, however, that McCarrick has faced criminal charges for assault of a minor, which is alleged to first have taken place at a wedding reception in 1974 and continued over the years in different states.

The state prosecutor, addressing the judge hearing the case, said McCarrick had immersed himself into the fabric of the victim’s family, using his status as a priest to access and prey on the boy.

Others have publicly accused McCarrick of abusing them as children, too, but charges weren’t pursued in many cases as the statute of limitations in those localities had run out.

In 2018, however, the Archdiocese of New York found an allegation that McCarrick had abused a 16-year-old altar server in New York in 1971 “credible and substantiated” and turned the case over to the Vatican.

McCarrick was dismissed by the Vatican from the clerical state in 2019 following an investigation of accusations that he had abused multiple children early on in his career of more than 60 years as a cleric, and that he also had abused seminarians as a bishop in New Jersey.

In November 2020, the Vatican issued a report attempting to understand, why, if church officials knew of the abundant allegations against him, they allowed the abuse to continue, and why the church elevated him to a cardinal.

The report showed that McCarrick had a deep friendship with St. John Paul II, who, as pope, heard about the sex abuse accusations against the cleric when he considered naming him a bishop, but believed him when he denied wrongdoings.

McCarrick has in the past denied allegations against him. In a 2019 interview with Slate magazine, he said: “I do not believe that I did the things that they accused me of,” speaking of those who have come forward.

Edited and shortened from a Catholic News Service Report By: Rhina Guidos