International Eucharistic Congress - "The Church would not exist without the Eucharist" 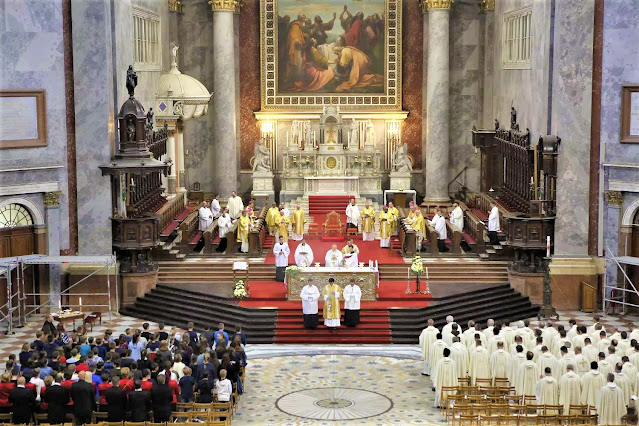 The Church would not exist without the Eucharist
06 September 2021
Theological Symposium was held in Esztergom, Hungary.
SEE FULL TEXT 54 Page Document from the Congress:
http://tar.eucharisztikuskongresszus.com/Downloads/IEC2020EN_bk.pdf

12 speakers from nine countries of three continents were studying from various aspects the mystery of the Eucharist at the Symposium held in Esztergom, Hungary from 2 to 4 September, 2021, as a pre-program of the 52nd International Eucharistic Congress.
One of the main findings, set by the three hundred participants of the scientific meeting, was that a new Evangelization, which was not intended to be the Eucharistic centre of the living faith, is not enough at all. Furthermore, developing the catechesis for preaching was not sufficient. The living faith, including the liturgical practice, should be pursued.

“How does life and hope come from the Eucharist for the man of the 21st century, who lives in fear, who wants to protect the created environment, but has no idea what to do? The man of the century is worried about his overtired culture, feels that the world would be far poorer without Christianity, still does not know what to do to make this amazing force alive and effective for modern mankind.”
– brought up the question Cardinal, Primate Péter Erdő in his greeting speech on the Opening Day to both the local and foreigner attendees arriving from Europe, Africa and South America.

Speakers gave answers to this very dilemma in the plenary session and faculties. It has been pointed out –amongst others- that if we want the Church liturgy to be maintained in the future, we should further recognise it as a sacred event within strict formalities, instead of accepting its desacralization and deformity. It has also been set forth that the Gospel, which inseminated and recreated the history of mankind, should continue in an unchanged manner while radiating its light and power in our current secular world. All above is topped with the key message that the call to the table of the Eucharist leads to the heart of the Christian mystery. The symposium truly attuned us to the Catholic world event starting on September 5 in Budapest.
Source: https://www.iec2020.hu/en