Pope Francis Meets with the President of Ireland Michael D. Higgins and Receives a Traditional Fisherman's Stick as a Gift - VIDEO 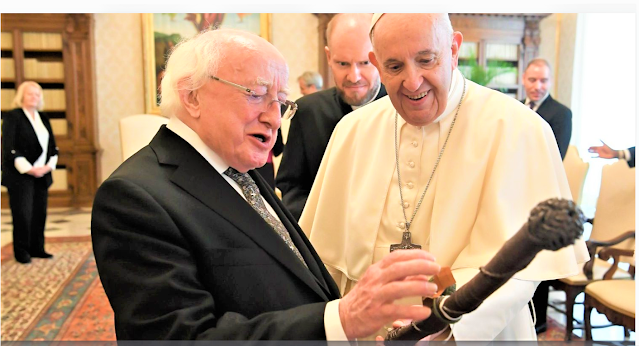 Pope Francis met for the third time with the President of Ireland, Michael D. Higgins.

The President gave Pope Francis a traditional fisherman's stick from one of Ireland's western islands a "Bata Iascaire", as they say in Irish, as a gift.

Today, the Holy Father Francis received in audience the President of Ireland, His Excellency Mr. Michael D. Higgins, who subsequently met with His Eminence Cardinal Secretary of State Pietro Parolin, accompanied by His Excellency Archbishop Paul Richard Gallagher, Secretary for Relations with States.

During the cordial talks, various matters of mutual interest were discussed, such as migration and the protection of the environment, with particular attention to the prospects of the 26th United Nations Conference on Climate Change (COP26), to take place in Glasgow. There was also a joint reflection on the consequences of the coronavirus pandemic and the future of Europe, focusing finally on the theme of the strengthening of the peace process in the country.