Pope Francis says to Jewish Community "The blessing of the Most High falls upon us when he sees a family of brothers who respect, love and collaborate with each other." FULL TEXT in Slovakia 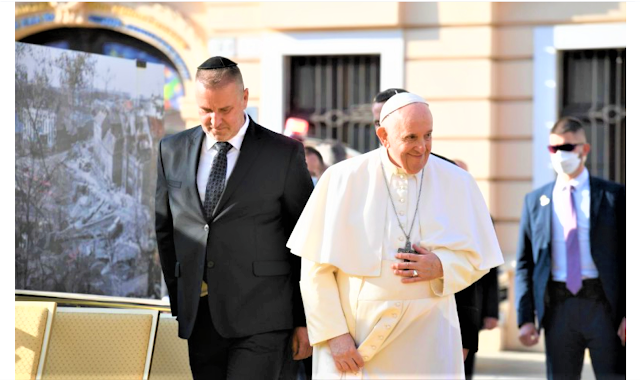 TO BUDAPEST, ON THE OCCASION OF THE CONCLUSIVE HOLY MASS
OF THE 52nd INTERNATIONAL EUCHARISTIC CONGRESS, AND TO SLOVAKIA
(12-15 SEPTEMBER 2021)

MEETING WITH THE JEWISH COMMUNITY

I thank you for your words of welcome and for the testimonies you have given. I am here as a pilgrim to touch this place and be touched by it. The square where we are located is very significant for your community. It keeps alive the memory of a rich past: it has been part of the Jewish quarter for centuries; the famous rabbi Chatam Sofer worked here. There was a synagogue here, right next to the Coronation Cathedral. The architecture, as has been said, expressed the peaceful coexistence of the two communities, a rare and highly evocative symbol, a stupendous sign of unity in the name of the God of our fathers. Here I too feel the need, like so many of them, to "take off my sandals", because I am in a place blessed by the brotherhood of men in the name of the Most High.

Later, however, God's name was dishonored: in the madness of hatred, during the Second World War, more than one hundred thousand Slovak Jews were killed. And when they wanted to erase the traces of the community, the synagogue was demolished here. It is written: "You shall not take the name of the Lord in vain" ( Ex20.7). The divine name, that is, his own personal reality, is named in vain when the unique and unrepeatable dignity of man, created in his image, is violated.

Here the name of God has been dishonored, because the worst blasphemy that can be brought to him is to use it for one's own purposes, rather than to respect and love others. Here, faced with the history of the Jewish people, marked by this tragic and unspeakable affront, we are ashamed to admit it: how many times the ineffable name of the Most High has been used for unspeakable acts of inhumanity! How many oppressors have declared: "God is with us"; but it was they who were not with God.

Dear brothers and sisters, your history is our history, your pains are our pains. For some of you, this Shoah Memorial is the only place where you can honor the memory of your loved ones. I am joining you too. On the Memorial is inscribed in Hebrew " Zachor ": "Remember!". Memory cannot and must not give way to oblivion, because there will not be a lasting dawn of brotherhood without first sharing and dissipating the darkness of the night. The prophet's question also resounds for us: "Watchman, how long is the night missing?" ( Is21.11). This is the time for us in which the image of God that shines in man cannot be obscured. Let's help each other in this. Because even today there is no lack of vain and false idols that dishonor the name of the Most High. They are those of power and money that prevail over the dignity of man, of indifference that turns his gaze to the other side, of manipulations that exploit religion, making it a matter of supremacy or reducing it to irrelevance. And again, they are the forgetfulness of the past, the ignorance that justifies everything, anger and hatred. We are united - I repeat - in condemning all violence, all forms of anti-Semitism, and in working to ensure that the image of God in the human creature is not profaned.

But this square, dear brothers and sisters, is also a place where the light of hope shines. Here every year you come to light the first light on the Chanukia candlestick . Thus, in the darkness, the message appears that it is not destruction and death that have the last word, but renewal and life. And if the synagogue on this site was demolished, the community is still present. It is alive and open to dialogue. Here our stories meet again. Here together we affirm before God the will to continue on the path of rapprochement and friendship.

In this regard, I keep alive the memory of the meeting in Rome in 2017 with the Representatives of your Jewish and Christian communities. I am pleased that a Commission for dialogue with the Catholic Church was subsequently established and that you have jointly published important documents. It is good to share and communicate what unites us. And it is good to continue, in truth and sincerity, in the fraternal path of purification of memory to heal past wounds, as well as in the memory of the good received and offered. According to the Talmud , whoever destroys one man destroys the whole world, and whoever saves one man saves the whole world. Everyone matters, and what you do through your precious sharing matters a lot. I thank you for the doors you have opened on both sides.

The world needs open doors. They are signs of blessing for humanity. To his father Abraham God said: "In you will all the families of the earth be blessed" ( Gen 12,3). It is a refrain that marks the lives of the fathers (cf. Gen 18,18; 22,18; 26,4). To Jacob, that is Israel, God said: “Your offspring will be as innumerable as the dust of the earth; therefore you will expand west and east, north and south. And all the families of the earth will be blessed in you and in your descendants "( Gen.28.14). Here, in this Slovakian land, a land of encounter between east and west, between north and south, the family of the children of Israel continue to cultivate this vocation, the call to be a sign of blessing for all the families of the earth. The blessing of the Most High falls upon us when he sees a family of brothers who respect, love and collaborate with each other. May the Almighty bless you, so that in the midst of so much discord that pollutes our world you may always be witnesses of peace together. Shalom!