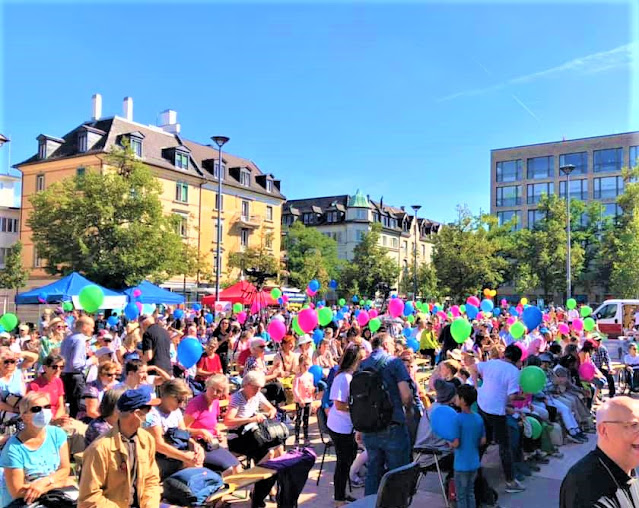 On 18 September, a March For Life was held in Switzerland. About 1,400 people gathered in Zürich. The start of the walk was delayed due to the barricades set up by far-left extremists. According to Swiss news website Livenet, the night before, radical groups attacked with paint the offices of the Swiss Evangelical Alliance, the Alliance Pro Life, and the Foundation Future CH. Throughout the one-hour march, worship music was played and colorful balloons were waved. This year’s focus of the Swiss march was to “draw awareness to the important issue of teenage pregnancies”.

Young women shared their experiences with early pregnancies and the pressure they felt about abortion. Some politicians and leaders of Catholic and Protestant organisations briefly addressed the participants. (Image: www.marschfuerslaebe.ch)

Those present were greeted with video messages from all over the world: leaders of the March-of-Life movements from Argentina, Canada, the USA and Germany let the life advocates from Switzerland know: "We are with you!" ("We are with you!"). Greetings were also sent by Bishops Charles Morerod (Freiburg) and Jean-Marie Lovey (Sion), which were presented by the auxiliary bishop emeritus Marian Eleganti (Chur).  In the morning he held a service for the “March for the Lord” in the Church of Our Lady in Zurich. Bishop Eleganti said, "We stand here on behalf of many innocent children who will never see the light of day." "We pray for all the innumerable children who were also recognized by God in the womb."

In the second part of the rally, the Valais National Councilor Benjamin Roduit (CVP / Die Mitte) declared in his speech: “Marching means living. We march for the weakest, most promising human being: for the child in the womb! " The politician referred to the preamble to the Federal Constitution, which says: "The strength of the people is measured against the well-being of the weak." Thousands of the very weakest are called to grow and become great. Since the abortion rate is very high, especially among young mothers, Roduit emphasized: "You and the future young fathers need our help."

Marc Jost, Secretary General of the Swiss Evangelical Alliance, commented: “It is no longer a matter of course to be able to express yourself freely in Switzerland without being affected by hatred and vandalism. We are concerned about this cultural change. However, we do not allow ourselves to be restricted in our socio-political engagement by this criminal minority. We also experience time and again that controversial and at the same time respectful debates are very possible. "