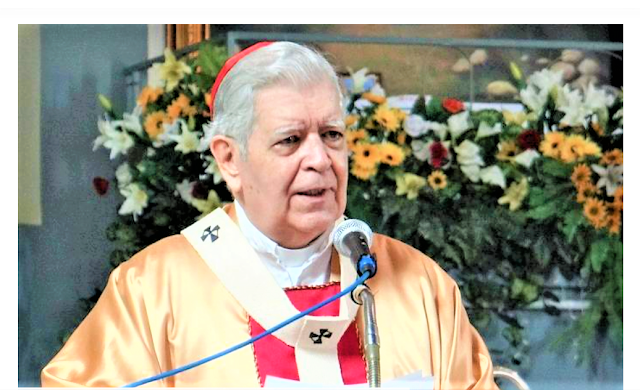 Pope Francis sent a telegram in honor of the archbishop emeritus of Caracas, Cardinal Jorge Urosa Savino, who died late Thursday, September 23rd, 2021 at the age of 79. The Venezuelan cardinal had been admitted to intensive care at the end of August. Cardinal Savino remained close to the suffering of the Venezuelan population to the very end, inviting political leaders to work together to peacefully resolve the political crisis wracking the country. (Vatican News excerpt)
Holy See Release:
We publish below the telegram of condolence for the death, which took place yesterday, 23 September 2021, of the Most Eminent Cardinal Jorge Liberato Urosa Savino, Metropolitan Archbishop Emeritus of Caracas (Venezuela), of the Title of Santa Maria ai Monti, sent by the Saint. Father Francis to the Most Eminent Card. Baltazar Enrique Porras Cardozo, Apostolic Administrator "Sede vacante et ad nutum Sanctae Sedis" of Caracas and Archbishop of Mérida (Venezuela):
Most Eminent Cardinal Baltazar Enrique Porras Cardozo

Archbishop of Mérida
Apostolic Administrator of the Archdiocese of Caracas

In receiving the news of the death of Cardinal Jorge Liberato Urosa Savino, Archbishop Emeritus of Caracas, I offer you, Eminence, my condolences, begging you to be kind enough to pass them on to the relatives of the deceased prelate and to all who are part of that ecclesial community.

Likewise, remembering this self-sacrificing Shepherd who, for years and with fidelity, dedicated his life to the service of God and of the Church, I offer suffrages for the eternal rest of his soul, so that the Lord Jesus may grant him the crown of glory that he does not withers and I impart my Apostolic Blessing to all, as a sign of Christian hope in the Risen Lord.

Cardinal Jorge Liberato Urosa Savino, Metropolitan Archbishop emeritus of Caracas (Venezuela), was born on 28 August 1942 in Caracas, Venezuela. He was ordained a priest on 15 August 1967 and holds a doctorate in theology.

On 13 July 1982 he was appointed titular Bishop of Vegesela in Byzacena and Auxiliary of the archdiocese of Caracas, where he also served as vicar general of the central zone.

On 17 March 1990 he was appointed Archbishop of Valencia, Venezuela.

Within the Bishops’ Conference, he was appointed as the country’s delegate to the Synod for America (1997) and was president of the Episcopal Commission of Social Pastoral Service.

He participated in the XIV Ordinary General Assembly on The Vocation and Mission of the Family in the Church and Contemporary World (October 2015).

He was a Member of the Council of Cardinals for the Study of Organizational and Economic Affairs of the Holy See.

Created and proclaimed cardinal by Benedict XVI in the consistory of 24 March 2006, of the Title of Santa Maria ai Monti (St. Mary ai Monti).