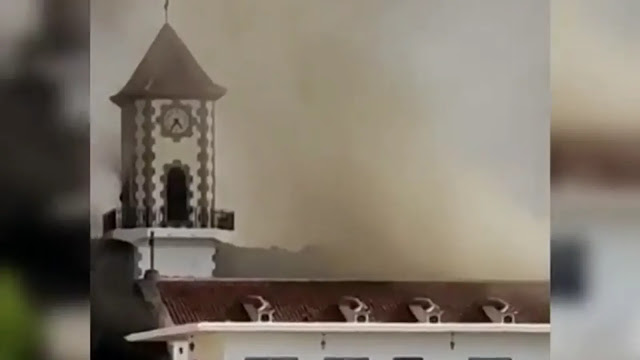 A volcanic eruption of the Cumbre Vieja on La Palma in the Canary Islands has destroyed the church of Saint Pius X in the Todoque neighborhood in the town of Llanos de Aridane on September 26th, 2021. The priest Alberto Hernández will not be able to celebrate the Eucharist in any of the four parishes that he is in charge of on La Palma.  (The Canary Islands is a Spanish archipelago in the Atlantic Ocean, in a region known as Macaronesia. Their closest point is the African mainland, 100 kilometres (62 miles) west of Morocco.)

Specifically, in Las Manchas, Todoque, La Laguna and Puerto Naos. All of them are in the security perimeter that the authorities have established after the eruption of one of the volcanoes , that of Cumbre Vieja. "I cannot access, they are in a risk zone," he says. He only has the parsonage left, where he has set up a small altar and will celebrate the Eucharist while an intense column of smoke can be seen through the window.

513 buildings were destroyed and thousands of people evacuated with no casualties so far. The parish priest removed the Blessed sacrament, tabernacle and other sacred vessels when the evacuation orders were given.

Some of them are housed in the rectory itself, as they had nowhere to go. “Right now, as a Church, we maintain telephone contact with the evicted and with those who we know have lost their homes. We are living it with great helplessness. The show is visually very beautiful, but when the sequels are seen it is something else, "he explains in conversation with Alpha and Omega .

In addition to the accompaniment, the priest is stocking himself with food to offer it to people who do not want to go to the shelters and are staying in the cars to see first-hand what is happening to their homes. He also offers them his house "to shower, to put a washing machine or whatever they need."

Ultimately, all that remains is to «cry with those who cry», because it produces «a lot of sadness» to see the story of so many people who «have made their lives based on effort - migrants, elderly ... - and that, suddenly, everything disappears under the lava.

«They are humble, simple and hardworking people. There are farmers and some officials. People who had built their own house and who had their livelihood in the countryside. Let us trust that the authorities respond and aid will arrive, ”he explains.

And although they are nervous and worried, the neighbors "are people of faith." “When I called the closest neighbor to the volcano –200 meters– to inquire about it, he told me: 'The house will be lost, but we are alive and it is a miracle that we are alive'. Faith is fundamental.

Along with Alberto Hernández's work, other parishes such as that of the municipality of El Paso have made parish halls and other units available to the authorities for the accommodation of evacuees, although for the moment they have not been necessary.Faced with this situation, Bishop Tenerife, Bernardo Álvarez , has shown his "closeness and solidarity" with all the inhabitants of La Palma, especially with those who have had to be evacuated or have lost houses and crops.

«I pray to God for all. Especially for the sick, the elderly and those with mobility problems. May the Lord give you patience and strength. I entrust the Virgin Mary of the Snows [patron saint of the island], to whom I ask that this phenomenon of nature cause the least possible damage and pass soon, "he said in a statement.

Reactions have also come from other dioceses. This is the case of Cardinal Carlos Osoro, archbishop of Madrid and vice president of the Spanish Episcopal Conference (CEE), who has affirmed through Twitter that "the events of La Palma unite us with our brothers in the Canary Islands and we pray for them."