WATCH an Exclusive Interview with Archbishop Marcel Damphousse, of the Catholic Archdiocese of Ottawa-Cornwall, on his Vocation Inspiration and Discussion of the Residential Schools 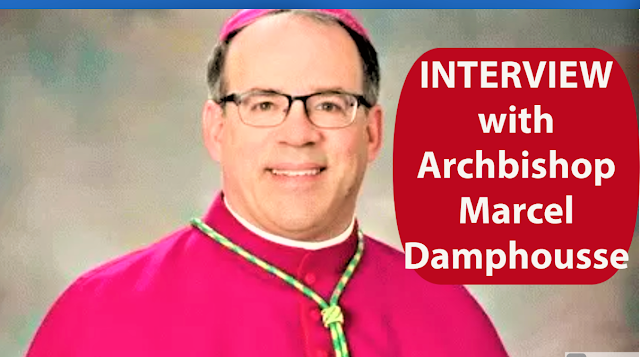 Archbishop Marcel Damphousse of Ottawa-Corwall, the nation's capital in Canada. This interview occurred at the end of August 2021 in Ottawa at Notre Dame Cathedral with Miriam Westen, founder of Catholic News World.
WATCH the  Exclusive Interview with Archbishop Marcel Damphousse, the head of the Catholic Archdiocese of Ottawa-Cornwall, where he reveals his Vocation Inspiration and he discusses the Residential Schools.
Biography: Born on March 19th, 1963, in Saint Joseph, Manitoba, Archbishop Marcel Damphousse was ordained a priest on June 28th, 1991 for the Archdiocese of Saint Boniface.
He served in a number of French and English parishes throughout the Archdiocese before being appointed Rector of the Cathedral in 2008. The Bishop earned a Bachelor’s degree in psychology in 1984 at the University College of Saint-Boniface, followed by a Bachelor’s degree in theology in 1989 from Saint Paul University, Ottawa.
He received his formation for the priesthood at Saint Paul’s Seminary, Ottawa. In 2002, he earned a licentiate in spiritual theology from the Teresianum in Rome. For a number of years, Archbishop Damphousse taught at the Manitoba Catholic School of Evangelization, and was vocations director for more than 12 years. Before being appointed Rector of the Cathedral, he was chaplain at St. Boniface Diocesan High School for five years. He gained experience as a member of the Diocesan Finance Committee, of the Presbyteral Council and of the Diocesan Commissions for Liturgy and for Catechesis. He also served as the spiritual director of the TEC (To Encounter Christ) movement for eight years. On June 28th, 2012, His Holiness Pope Benedict XVI appointed the Reverend Marcel Damphousse as Bishop of Alexandria-Cornwall. He was ordained bishop on September 2, 2012 in St. Finnan’s Cathedral in Alexandria, ON. On November 12th, 2015, His Holiness Pope Francis appointed Bishop Damphousse as the sixth Bishop of the Diocese of Sault Ste. Marie, Ontario, Canada. On May 6, 2020, Archbishop Marcel Damphousse was named the coadjutor archbishop of the newly created Archdiocese of Ottawa-Cornwall. He succeeded Archbishop Terrence Prendergast following the latter's retirement on December 3, 2020.
(Biography from https://en.archoc.ca/archbishop)