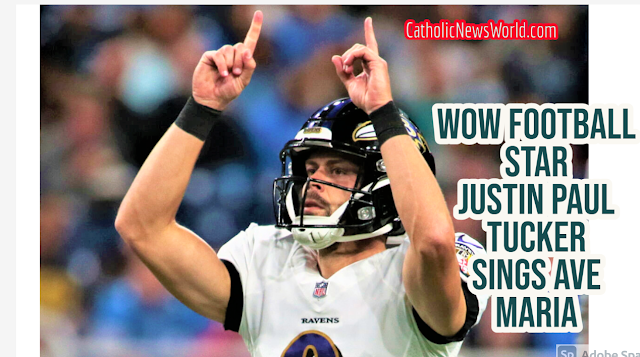 Justin Paul Tucker, an American NFL Football star, just made history by  kicking the longest field goal (66 yards), which he set on September 26, 2021. Justin was born on November 21st, 1989. He is an American football placekicker for the Baltimore Ravens of the National Football League. Tucker is the most accurate placekicker in NFL history. He set the new NFL record for the longest game-winning field goal on Sunday. Tucker is a devout Catholic Christian and makes the sign of the cross before every kick. Tucker is also a classically trained bass-baritone singer. Justin sang "Ave Maria" and "O Holy Night" for Catholic Charities benefit concerts, see videos below.  Tucker married Amanda Bass in March 2015; their son Easton, was born on May 10, 2016 and they live in Maryland. (Starts at the :35 mark on video below)
Here he also sings O Holy Night for the Catholic Charities: