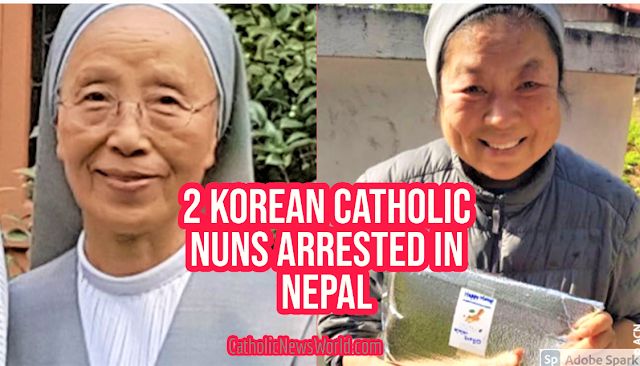 ACN report: Two Korean missionaries from the Congregation of Sisters of St. Paul of Chartrese have been detained for almost one month in Nepal on charges of proselytism and conversion activities, namely through allurement, force, and coercion.
Sisters Gemma Lucia Kim and Martha Park, were working in Pokhara, about 200 km from the capital city, Kathmandu, when they were arrested by the police on the evening of 14 September. The sisters were kept in police custody until 27 September, when they were sent to the district prison after bail was denied.

In his statements to the pontifical foundation Aid to the Church in Need (ACN), Bishop Paul Simick, Vicar Apostolic of Nepal, says that “the Catholic Community of the country is shocked to hear about the verdict. Despite all the assurances given to us that the sisters would be granted bail, the decision went against them.”

The sisters run a training centre in the Pokhara slum area. During the Covid-19 pandemic, they were distributing rations to vulnerable people when a group of people accused them of alluring people to become Catholics by giving them low quality food.
“We believe that the allegations of conversions are utterly baseless and unjust. This act reveals not only bigotry on the part of those who accused the sisters, but also ignorance of the needs of the poor. We, as Catholics, do not indulge in forceful conversion and the Korean sisters are known for doing exclusively social work”, Bishop Simick says.
“The sisters have been dedicating themselves totally to the poor for so many years. Therefore, we would like to call for an in-depth inquiry into what happened”, he adds.
Speaking about the current spirit of the Korean nuns, the Vicar Apostolic of Nepal says: “I just met them last week. Every time I met them, they were very calm and serene. They have no special facilities, and they are living with other prison inmates. Both the sisters are elderly, and I am worried about their health”.
Bail hearings are only on Thursdays, but they have been suspended due to Hindu festivals for three weeks. The local Church hopes that their hearing can take place on Thursday 28 October.
“The Catholic Community views this incident as an attack on minority communities, and an attempt to criminalize particularly Christian missionary activities such as social services, providing education, and health care, which could be construed as allurement for conversion” Bishop Simick points out.


In his message to ACN benefactors Bishop Simik says: “We express our communion, our solidarity, and our spiritual closeness with the sisters, with their great religious community, and with their family. We entrust them to God and remain united in prayer for their release. Thank you for your concern. Please continue praying for the Church of Nepal and the release of the sisters.”
In recent years Christian Churches in general have been experiencing growing hostility and intolerance in Nepal. According to the Religious Freedom Report 2021, published by the pontifical foundation Aid to the Church in Need, following the adoption of the new Constitution in 2015 and the new penal code outlawing proselytism and efforts to convert others – which came into force in August 2018 – Nepal has witnessed an increase in legal and social pressure on Christians. Furthermore, in recent times, some of the foreign priests and religious sisters were denied visas and had to leave the country.
Edited from Source: https://web.archive.org/web/20211025222159/https://acninternational.org/nepal-local-church-is-shocked-by-arrest-of-two-religious-sisters-in-pokhara/