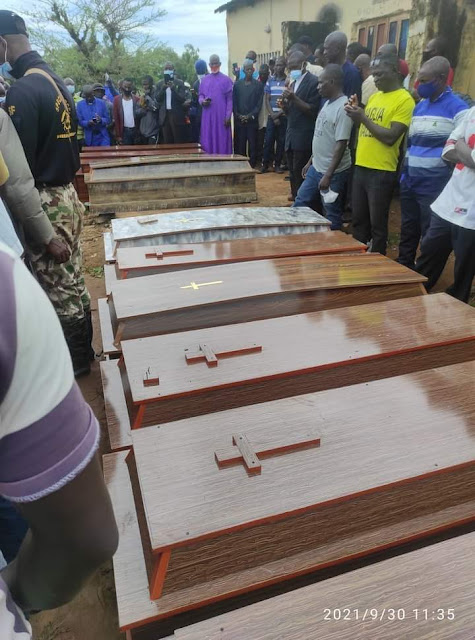 Herdsmen Kill Christian at Worship, 40 Others in One Day
After church attack on Sunday, two villages raided that night.
Pope Francis prayed for the victims of the attacks at the Wednesday General Audience, and called for the safety of all Nigerians to be protected. “I pray for those who have died, for the wounded, and for the entire people of Nigeria,” he said. “I hope that the safety of all citizens in the country will always be guaranteed,” added the Pope.
Fulani herdsmen killed a Christian at a worship service in Kaduna state, Nigeria on Sunday (Sept. 26), and 40 others were slain in attacks later that night, sources said.
Morning Star News reports that the herdsmen attacked the worship service of the Evangelical Church Winning All (ECWA) in Gavaciwa, Kachia County, killing one member of the congregation and wounding many others, area resident Mercy Musa said in a text message to Morning Star News.
Neither Musa nor Kaduna state government spokesman Samuel Aruwan identified the slain Christian. In a press statement, Aruwan said some church members were seriously injured, that Kaduna state Gov. Nasir Ahmad el-Rufai expressed his condolences for the church and the family of the slain victim and that he “prayed for the repose of the soul of the worshipper.”
“The governor, who expressed sadness over the incident, described it as an evil act targeting innocent citizens exercising their constitutional and universal rights to religious freedom,” Aruwan said. “The governor added that the attack on the worshippers was a divisive intent of the criminals leveraging religious sensitivity.”
Muslim Fulani herdsmen that night killed 30 Christians and destroyed dozens of homes in two communities of Kaura County, Madamai and Abun villages, area resident Becky James said. She said said by text message that herdsmen attacked at about midnight, and that her relatives were among those affected. Many houses were razed during the attack, she said.
“Our hearts are filled with pains, fears, bitterness and disappointments,” James said. “The trauma, the macabre series of murders, the daily kidnappings, attacks on farmers and destruction of crops, the burning of houses, churches and humans alive, the mass burials are very disturbing. What we’ve got left is God and hope.”
In Zangon Kataf County on Sept. 12, Fulani herdsmen killed two Christians in an attack on predominantly Christian Ahpiagyim village, Musa said.
“We’ve lost two Christians, a man and his wife, to a Fulani herdsmen attack,” she said. “Many other Christians are affected as houses in the community have been destroyed.”
On Sept. 7-9, Fulani herdsmen abducted more than 40 Christians from Unguwan Maje, Ungwan Laka and Keke villages in Chikun County, area residents said.
“The herdsmen were in large numbers when they stormed these villages,” Shuaibu Joshua told Morning Star News by text message. “They shot at anyone in sight and eventually took these Christians away.”
The herdsmen on Sept. 9 attacked Ungwan Maje, kidnapping 16 Christians, including women and children, Joshua said. They then went to Ungwan Laka village, killing Joshua Markus and kidnapping seven other Christians, including Markus’ wife and daughter, Joshua said.
At about midnight on Sept. 7 in Keke village, Chikun County, a band of 20 armed herdsmen abducted 18 Christians, according to area resident Ibrahim Audu.
Nigeria was the country with the most Christians killed for their faith last year (November 2019-October 2020), at 3,530, up from 1,350 in 2019, according to Open Doors’ 2021 World Watch List. In overall violence, Nigeria was second only to Pakistan, and it trailed only China in the number of churches attacked or closed, 270, according to the list.
In this year’s World Watch List of the countries where it is most difficult to be a Christian, Nigeria broke into the top 10 for the first time, jumping to No. 9 from No. 12 the previous year.
Numbering in the millions across Nigeria and the Sahel, predominantly Muslim Fulani comprise hundreds of clans of many different lineages who do not hold extremist views, but some Fulani do adhere to radical Islamist ideology, the United Kingdom’s All-Party Parliamentary Group for International Freedom or Belief (APPG) noted in a recent report.
“They adopt a comparable strategy to Boko Haram and ISWAP [Islamic State West Africa Province] and demonstrate a clear intent to target Christians and potent symbols of Christian identity,” the APPG report states.
Christian leaders in Nigeria have said they believe herdsmen attacks on Christian communities in Nigeria’s Middle Belt are inspired by their desire to forcefully take over Christians’ lands and impose Islam as desertification has made it difficult for them to sustain their herds.
“In 2015, Muhammadu Buhari, a Fulani, was elected president of Nigeria,” the group reported. “He has done virtually nothing to address the behavior of his fellow tribesmen in the Middle Belt and in the south of the country.”
The U.S. State Department on Dec. 7 added Nigeria to its list of Countries of Particular Concern for engaging in or tolerating “systematic, ongoing, egregious violations of religious freedom.” Nigeria joined Burma, China, Eritrea, Iran, North Korea, Pakistan, Saudi Arabia, Tajikistan and Turkmenistan on the list.
On Dec. 10 the prosecutor of the International Criminal Court, Fatou Bensouda, issued a statement calling for investigation into crimes against humanity in Nigeria.
Source: https://morningstarnews.org/