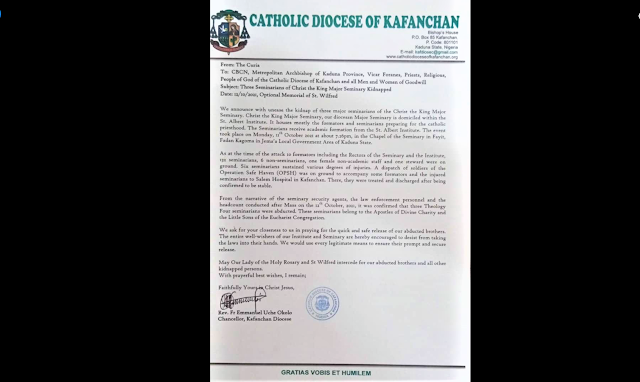 In Nigeria, Africa, Christ the King Major Seminary located in Fayit, Fadan Kagoma in Jema’a Local Government Area, was attacked on Monday October 11th, 2021.
According to a statement, the diocesan Major seminary is housed inside the St. Albert Institute where the seminarians receive academic formation. The Seminary houses the seminarians preparing for the Catholic priesthood.
During the attack, 10 formators, including the Rectors of the Seminary and the Institute, 132 seminarians, 6 non-seminarians, 1 female non-academic staff member and one steward were on the premises.
Six seminarians were injured during the attack and they went to a hospital in Kafanchan where they were treated and discharged.
3 seminarians were kidnapped who belong to the Apostles of Divine Charity and the Little Sons of the Eucharist congregations and are all in their fourth year of theology studies.
“We ask for your closeness to us in praying for the quick and safe release of our abducted brothers,” read the statement signed by Fr. Emmanuel Uche Okolo, the Chancellor of the diocese.
The diocese also called on well-wishers of the Institute and the Seminary to “desist from taking the laws into their hands” adding that “we would use every legitimate means to ensure their prompt and secure release.”
“May Our Lady of the Holy Rosary and St. Wilfred intercede for our abducted brothers and all other kidnapped persons,” the statement said.
Insecurity in northern Nigeria
Edited from Vatican News