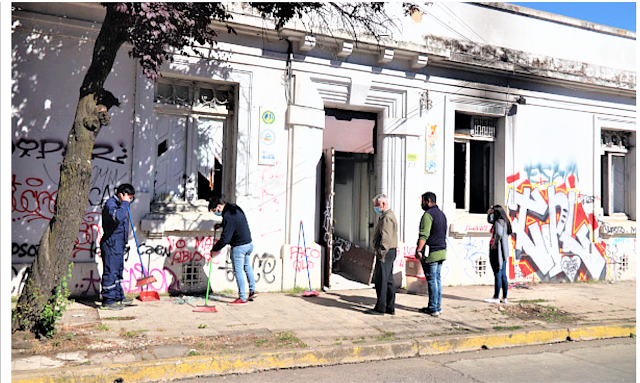 On October 18th 2021, the Bishopric of the Diocese of Talca in Chile was vandalized and set on fire, it housed the Vicariate of Youth Ministry, the Vicariate of Social Pastoral, the Department of 1%, the Pastoral Care of Human Mobility and the University Student House Foundation.

We inform the community that on the night of October 18, unknown persons looted and burned the offices of this bishopric, located at 4 Oriente 1019, where the Vicaría de Pastoral Juvenil, Vicaría de Pastoral Social, Depto. of 1%, Pastoral de Movilidad Humana and Fundación Hogar de Estudiantes Universitarios.

Faced with these painful events, we want to express:
• Gratitude to those who have immediately expressed their solidarity and support. Above all, to those who came to the site promptly to control the fire and prevent further damage; Our most sincere gratitude to the neighbors, the Fire Department volunteers, the Carabineros de Chile and the staff of the bishopric.
• Being victims of this irrational violence helps us understand and sympathize with the pain that so many have experienced in similar circumstances in recent times. We think especially of those who have been affected in their job sources.
• We reiterate our conviction that peace and dialogue are the path of justice and development. That violence does not represent the aspirations of the vast majority of the country, since it does not contribute in any way to solving Chile's problems, particularly the most vulnerable.
• Despite the difficulties, we will continue with renewed conviction in serving the most deprived and in the task of joyfully announcing the name of Jesus, Lord and Savior.