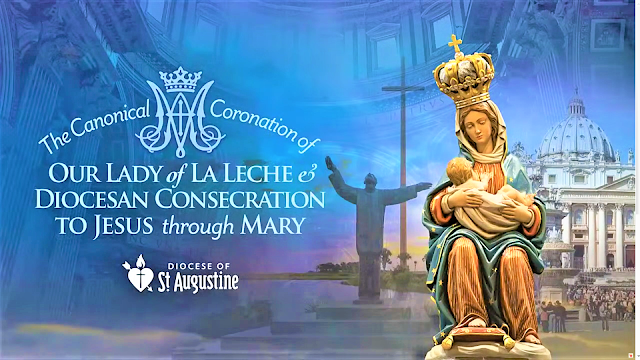 In the early 1600s, Spanish settlers brought with them to the New World a special devotion to Our Lady of La Leche y Buen Parto. Four hundred years later, the National Shrine of Our Lady of La Leche has kept this devotion alive through countless people of faith. And the Holy Father himself has recognized the importance and sanctity of this devotion by granting a Canonical Coronation for Our Lady of La Leche on Sunday, Oct. 10 at 2 p.m. at the Cathedral Basilica of St. Augustine. This once-in-a-lifetime and completely unique event is an incredible blessing for the Diocese of St. Augustine and the oldest Marian shrine in the United States! (Full Crowning Video at bottom of this Post)
A canonical coronation is a formal act of the pope to crown an image of Christ, the Blessed Virgin Mary, or St. Joseph in the name of the Holy Father. The crowning acknowledges that the specific image, while having local significance, also has universal importance for the Catholic Church as it pertains to the Salvation Christ won for us by the Paschal Mystery of his death and resurrection. The practice began in the 17th century but became increasingly popular in the late 1800s. Many people are familiar with a May crowning as many parishes and schools annually have one as a sign of their devotion to Mary. A canonical coronation is different in that this will only happen once to this specific image of Our Lady of La Leche.
FULL TEXT Source: https://coronation.dosafl.com/