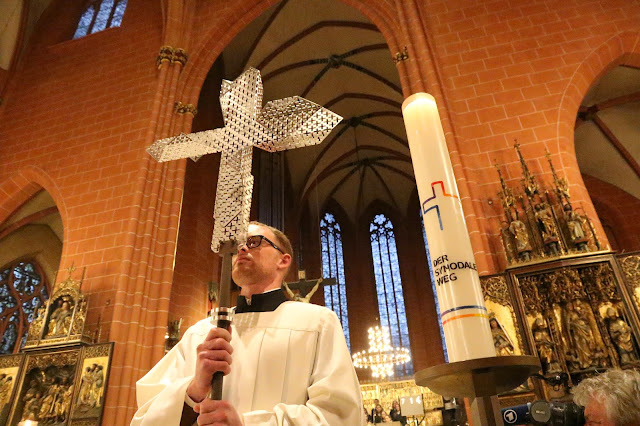 The second Synodal Assembly of the Synodal Path of the Catholic Church in Germany ended today (October 2, 2021). During the three-day event, in addition to two texts from the Presidium of the Synodal Way, a total of twelve of 16 texts from the four synodal forums were discussed and voted on in order to update them in the synodal forums for the next reading. Issues related to the processing of sexual abuse of minors in the area of ​​the Catholic Church and the establishment of an administrative judiciary were also a focus. During the Synodal Assembly, three of the 20 or so international observers spoke.

The voting results of the texts show that the synodals want to continue working continuously and with commitment on the texts that were given for the first reading in the synodal assembly, according to the Presidium of the Synodal Way. “Individual amendments went through with an average of two-thirds majorities. The twelve final votes of the assembly on recommending the texts as a whole for further work had an agreement of between 76 and 92 percent. ”There were lengthy, committed debates particularly on the questions of how synodality should be strengthened sustainably and how the priestly life today for tomorrow could be redefined.

"We are practicing the synodality, which the Pope describes as constitutive for the Church," said the President of the Central Committee of German Catholics (ZdK) and President of the Synodal Way, Prof. Dr. Thomas Sternberg. “I went to Frankfurt am Main with great misgivings, due to the different positions of Synodal groups and the amount of items to be discussed. But: Frankfurt II has shown: Synodality - cooperation is possible. There were fair debates and constructive arguments. I am glad that we saw a calm presentation of controversial positions, ”said Prof. Sternberg.

Bishop Dr. Georg Bätzing, Chairman of the German Bishops' Conference and President of the Synodal Way, emphasized: “Texts have been debated that are not just texts, but dreams put into words about how we want to change the church in Germany: a church that is participative, gender equitable and is on the way with people. Here we have shown that we listen to each other in quiet work and in good and objective discussion. Texts have been improved here in Frankfurt. Now the forums have the task of developing the templates further so that they have a quorum for adoption the next time. “The forums are instructed to continue working. We are waiting for the content that will be introduced in the third synodal assembly and we suspect: We still need a good deal of time, ”said Bishop Bätzing.

Bishop Dr. Franz-Josef Bode, Bishop of Osnabrück and Vice President of the Synodal Way, emphasized the fair and constructive atmosphere of the struggle for important future issues of the church. “This second synodal assembly is a decisive step for the growing synodality. We have made directional decisions that are also to be brought into the worldwide Synodal Way. That is why I very much hope for a real dialogue soon with the synodal institutions in Rome and also with the Pope. The good spirit of the first synodal assembly in Frankfurt continues to blow strongly. "Bishop Bode added:" It was particularly intense and impressive how we discussed and voted on the proposal for 'Living in Successful Relationships'. We spoke openly and controversially and wrestled with one another. In terms of content, we have set very important course: The text appreciates sexuality as a positive force and recognizes that all human beings in their sexuality are created and loved by God; Sexuality and identity belong together. The consequence of this foundation is that we instruct the forum to continue on the path that leads to a further development of sexual morality. With that we also started to point out that our position has hurt people in the past. "

The Vice President of the ZdK and the Synodal Way, Karin Kortmann, declared at the end of the Synodal Assembly: “The deliberations and resolutions of the Synodal Assembly gave us a lot of baggage for the future. The honest dealings of the synod with each other and the very good content templates from the forums are a good foundation for this. The synodal fellowship responsibly weighs up the high expectations of structural changes in the concert of universal church coexistence. In this way, we can confidently bring our concerns into the deliberations of the Synod of Bishops convened by Pope Francis on the Synodal Way, ”said Karin Kortmann.

The Presidium of the Synodal Way was relieved that the Synodal Assembly could be held in attendance. "We are grateful to everyone involved, especially in the forums, who have achieved a lot." The central goal was achieved in Frankfurt: to take a good step forward with the forum texts. The Presidium added: “There are synodal ways in several countries. We are grateful for the presence of the 20 observers from the ecumenical and international context. The Synodal Way in Germany stands in the tradition of synodal processes as we have known them intensively since the Second Vatican Council. In Germany, the Synodal Way is an indirect reminder of the Würzburg Synod and the Dresden Pastoral Synod in the 1970s. The point is to keep Catholic teaching and church life present in the present. "

The Presidium of the Synodal Way jointly warned against excessive expectations of the reform process. “Even if a series of reforms should stand at the end of the Synodal Path, this does not automatically stop people leaving the Church and end crises of faith. But without the Synodal Way and its attempt to create a renewal, it will be difficult for many Catholics in the long run. You will be addressed critically about the problem of abuse. You will be asked about causes and solutions. For many, the credibility of the church is linked to their personal credibility as Catholics. A fraternal, synodal church is therefore a vision of the synodal path. All questions raised on the Synodal Path have to do with the dimension of faith. So it is ultimately about the existence of the church. Therefore the Synodal Way is not just any event, but an existential event for the Church based on the faith of God's people. "

At the end of the deliberations, the Presidium regretted that not all texts could be processed on Saturday afternoon because the time was too short and in the end the synodal assembly no longer had a quorum. In view of the experiences of the second Synodal Assembly and the realization that the voting processes need time, the Presidium of the Synodal Way has proposed to hold a fifth Synodal Assembly in spring 2023 to conclude all deliberations. The ZdK and the German Bishops' Conference will deal with this at their next meetings.