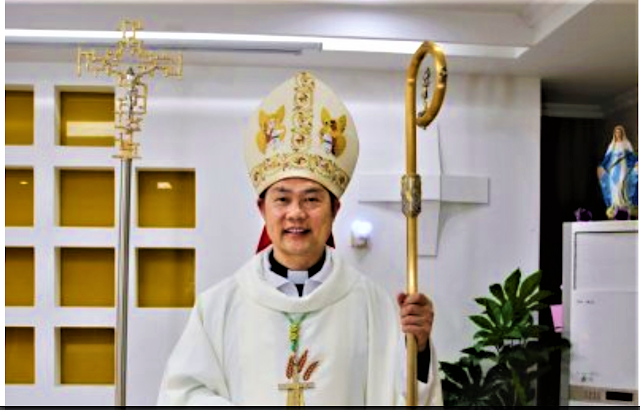 AsiaNews reports that officially, the cleric was taken away on "vacation". He is often subjected to brainwashing to push him to join the "official" church, controlled by the Chinese Communist Party.

Targeted on the eve of the month of the dead. Persecuted like Msgr Lin Xili, first bishop of Wenzhou.

Chinese authorities seized Msgr. Shao Zhumin, bishop of Wenzhou (Zhejiang). AsiaNews has learned this from sources on the ground who relay that the bishop was officially taken away "on vacation".

In a message, Chinese Catholics ask for prayers for the kidnapped bishop: "Pray that the Lord will give him confidence and courage, that he will not be demoralized by what happened; pray also that he will remain healthy and whole, under the guidance of Christ, so that he may return to us as soon as possible to shepherd his flock; let us pray together.

It is not the first time the police have arrested Msgr. Shao, making him disappear for months. The authorities regularly subject him to "brainwashing" sessions to make him accept the directives of the "patriotic" religious bodies, linked to the Chinese Communist Party (CCP). The Bishop of Wenzhou is recognized by the Pope, but not by the Party, which claims to exercise its control over all religious activities.

The kidnappings of Bishop Shao are almost scientific. They always occur on the eve of important periods in the life of the Catholic communities: Christmas, Easter, the Assumption and now November, the month of prayer for the dead (in Chinese tradition, Qingming, the remembrance of the ancestors, is instead celebrated in spring).

In November many masses are celebrated for the dead, accompanied by meetings, rosaries and prayers. In Zhejiang the percentage of Christians is over 10%. The faithful of Wenzhou are very zealous, and every year at this time they go to the cemetery where Msgr. James Lin Xili (林锡黎主教), the first local bishop, rests. Ordained in 1992 by Pope John Paul II, Msgr. Lin was an "underground" bishop, not recognized by the Chinese regime. In 1999, the authorities arrested him and then kept him under control until his death in 2009.

In past years, authorities have blocked the entrance to Wenzhou's cemetery with iron barriers to prevent Catholic believers from gathering; this year they directly took Msgr. Shao away. The Party-mandated "New Regulations on Religious Activities," which went into effect in February 2018, only allow  activities (including theological schools) that are held in places that are registered and controlled by the government. Religious personnel can only perform their functions if they adhere to the "official" Church and submit to the CCP.

The signing in 2018, and renewal in October 2020, of the Sino-Vatican Agreement on the Appointment of Bishops has not stopped the persecution of Chinese Catholics, especially unofficial ones. In addition to the case of Msgr. Shao, there is that of Msgr. Jia Zhiguo, placed under house arrest. Then there are bishops who have had water, electricity and gas cut off in their homes, such as Msgr. Guo Xijin; and bishops subjected to political sessions such as Msgr. Zhang Weizhu.