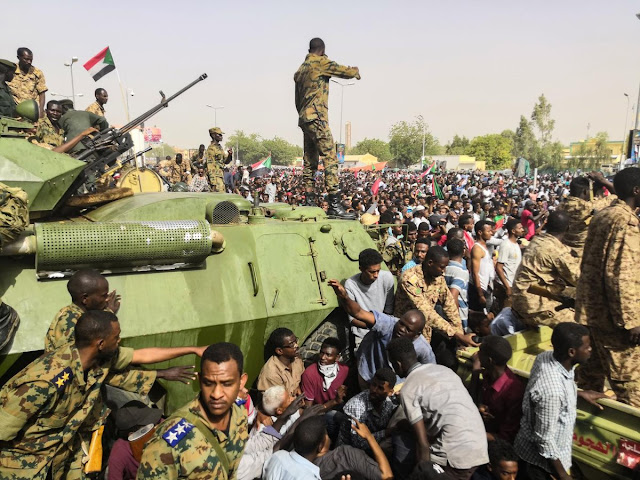 Major news networks report that at least 7 people were killed and over 140 injured during the takeover by the military in Sudan, Africa. (See video below)
AFRICA/SUDAN - The military takes power with a coup, people take to the streets
Agenzia Fides Report - "While we are speaking we hear gunshots. As we feared, the army began firing on demonstrators who, since the early hours of the morning, have poured into the streets to demand an immediate end to the coup process and a return to democratic transition". This was reported by Fides sources in the Church in Sudan, asking "especially in this moment of great uncertainty and fear" to remain anonymous. The source of Fides was reached by telephone (90% of telephone lines, internet and roads have been interrupted since dawn) in the late morning of Monday, October 25, a few hours after the coup d'état. The great African Country, two and a half years ago the scene of a "Spring" that surprised the world for its peaceful and bloodless management, above all, for the ousting of dictator Omar al-Bashir, seems to have plunged back into autocratic chaos and feed fears of a return to the past.

"In the night - our sources report - after days in which rumors were chasing each other and confirmations were feared, there was a coup. The internet and telephone lines, roads and the airport have been closed. There is a massive military presence and it will be a question of understanding who will be the new leader and, above all, how the population will react who, rather than turning back, is ready for anything. Since last night we have been asking ourselves many questions, but there are two aspects that worry us most. On the one hand, the reaction of the military to the demonstrations that are taking place: from these first signs, the intention is to repress them strongly even if, in the meantime, we receive news of soldiers at the checkpoints that instead allow the demonstrators to pass. On the other hand, who is behind this move. Who are the military at the head of the coup? Are they Islamists? A more secular branch? And then, perhaps also the Janjaweed of Darfur (the infamous militias responsible for brutal massacres and massacres in the central-western region) fall into the group of military coups?"
After the arrest, in the early hours of dawn, of Prime Minister Abdalla Hamdok and his wife, military vans surrounded the homes ministers Hamza Baloul and Ibrahim al-Sheikh, the governor of the capital Khartoum, Ayman Khalid, media relations adviser Faisal Mohammed Saleh and spokesman for the sovereign council Mohammed al-Fiky Suliman, in order to arrest them. "They are good people who had personally committed themselves - the source continues - and who pay for their loyalty to the people. It seems that the military wants the Prime Minister to step down 'spontaneously' and declare himself ready to join a coup executive; but Hamdok holds firm and calls people to protest. The officers want power without losing face, as if people were stupid and not already aware of the maneuvers". The coup takes place at the height of a period of strong tensions between the military and civil society that two years ago had signed a transition agreement that provided for a "rotating presidency" and which, next November 17, should have led to a presidency expressed by civil society and the continuation of the government experience at 50% . The military, in fact, made it increasingly clear that they did not want to leave the presidency and, to spread chaos and panic, they triggered and foraged demonstrations of the population invoking the "hard fist" to put an end to the heavy economic crisis and politics of recent times. The source of Fides concludes: "The president of the Transitional Council Abdel Fattah al-Burhan has proclaimed a state of emergency across the country, with the dissolution of the aforementioned Council and the government. They essentially dissolved the sovereign council and the executive, practically tearing the agreement between civilians and military of two years ago. They say they did it to save the revolution but it is an act that definitively buries it". (LA) (Text Source: Agenzia Fides, 25/10/2021)
Image Source: Creative Commons 1.0 by Agence France-Presse