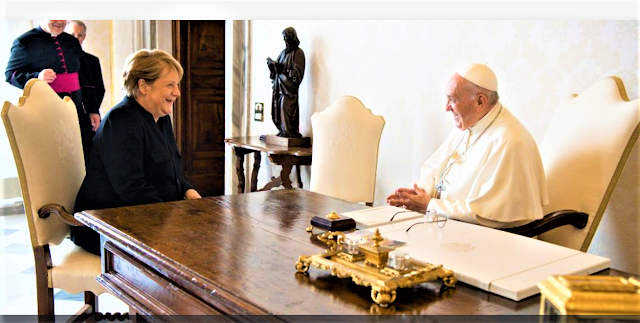 Holy See Press Office Communiqué: (SEE VIDEO Below)
This morning, 7 October, the Holy Father Francis received in audience, in the Vatican Apostolic Palace, the Chancellor of the Federal Republic of Germany, Her Excellency Mrs. Angela Merkel, who subsequently met with His Eminence Cardinal Secretary of State Pietro Parolin, accompanied by His Excellency Archbishop Paul Richard Gallagher, Secretary for Relations with States.

During the cordial discussions, appreciation was expressed for the good existing bilateral relations and the fruitful collaboration between the Holy See and Germany.

The parties then turned their attention to matters of mutual interest in the international and regional spheres, agreeing on the advisability of relaunching cooperation to address the multiple crises underway, with particular reference to the consequences of the health emergency and migration.

This was the seventh meeting between the Chancellor and the Pope at the Vatican. After their conversation, Chancellor Merkel presented Pope Francis with a number of books. One was a three-volume set of commentary on the year's Sunday Gospel readings. -"A bible written in light terms. Easy, simple." The other was a book about Michelangelo written by art historian Horst Bredekamp, who attended the meeting with the Pope as Chancellor Merkel's honorary guest. -"Inside are 50 years of my work on the Vatican." The Pope gave the chancellor a small bronze replica of the Holy Door. And a collection of the important texts of his pontificate. -"I signed it today for you." (RomeReports Excerpt)