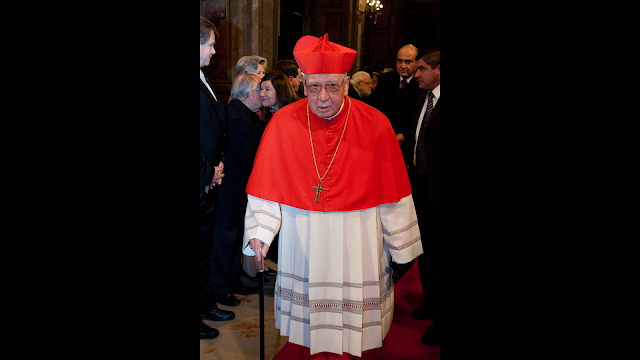 Pope Francis sent a telegram of condolence upon the death of Cardinal Estévez, who announced the election of Benedict XVI as Pontiff. Cardinal Estévez died on Sunday, October 3rd, 2021, at the age of 94.

Telegram from the Holy Father for the death of Card. Jorge Arturo Medina Estévez, 04.10.2021

We publish below the telegram of condolence for the death, which took place yesterday, Sunday 3 October 2021, of the Most Eminent Cardinal Jorge Arturo Medina Estévez, Prefect Emeritus of the Congregation for Divine Worship and the Discipline of the Sacraments, of the Title of St. Saba, sent by the Holy Father Francis to HE Mons. Alberto Ortega Martín, Apostolic Nuncio in Chile:

In receiving the news of the death of Cardinal Jorge Arturo Medina Estévez, Archbishop Emeritus of Valparaíso, I offer my condolences to the relatives of the deceased prelate and to the faithful of the Churches of Rancagua and Valparaíso in which he served as Pastor.

Likewise, remembering this self-sacrificing prelate who, for years and with fidelity, dedicated his life to the service of God and of the universal Church also as Prefect of the Congregation for Divine Worship and the Discipline of the Sacraments, I offer prayers of suffrage for the eternal rest of his soul, so that the Lord Jesus may grant him the crown of glory that does not wither and I impart the Apostolic Blessing to all, as a sign of Christian hope in the risen Lord.

Cardinal Jorge Arturo Medina Estévez, Prefect emeritus of the Congregation of Divine Worship and the Discipline of the Sacraments, was born on 23 December 1926 in Santiago de Chile, Chile.

In the same city he did his primary and secondary studies at the Liceo Alemán and prior to entering the seminary he attended the law faculty at the Pontifical Catholic University of Chile. He also obtained a baccalaureate in arts and in biology. He entered the major seminary of Santiago and was ordained a priest on 12 June 1954.

In 1955 he received his doctorate in theology. Until 1965 he taught philosophy at the seminary and until 1994 theology at the faculty of the Pontifical Catholic University of Chile, where he also served for several years as dean. From 1974 to 1985, he was Pro-Grand Chancellor of the same university.

For many years he was canon penitentiary of the metropolitan cathedral of Santiago, and also judge of the ecclesiastical tribunal of Santiago.

He served as a peritus at Vatican Council II. He was later a member of the International Theological Commission and the drafting commission for the Catechism of the Catholic Church.

On 18 December 1984 he was elected titular Bishop of Tibili and at the same time nominated Auxiliary of Rancagua. He was ordained by John Paul II at St. Peter’s Basilica on the Epiphany of 1985.

In 1986 he was nominated Apostolic Administrator of the diocese of Rancagua and on 25 November 1987 he became Bishop. Then on 16 April 1993, he was appointed Bishop of Valparaíso.

In 1992 the Pope nominated him Secretary General of the IV General Conference of Latin American Bishops, celebrated 12-28 October in Santo Domingo. In 1993 he preached the Holy Father’s Lenten retreat.

He is the author of many works: books, theological-pastoral booklets and articles on ecclesiological themes, spirituality and canon law.

His renowned participation in Vatican Council II had earned him in 1996 a honoris causa doctorate from the Notre Dame University in Indiana and, due to his teachings and publications, he received a Doctor Scientiae et honoris causa from the Pontifical Catholic University of Chile. He was also nominated Chaplain ad honorem of the Sovereign Military Order of the Hospital of Saint John of Jerusalem, of Rhodes and of Malta.

On 21 June 1996 John Paul II appointed him Pro-prefect of the Congregation for Divine Worship and Discipline of the Sacraments. That same day he resigned as bishop of the diocese of Valparaíso and on 19 September 1996 was promoted to Archbishop.

Prefect of the Congregation of Divine Worship and Discipline of the Sacraments, 23 February 1998 - 1 October 2002.

Created and proclaimed Cardinal by St. John Paul II in the Consistory of 21 February 1998, of the Title of San Saba (deaconry raised pro hac vice to presbyteral title on 1 March 2008).

Cardinal protodeacon,  24 February 2005 - 23 February 2007.  As protodeacon, he announced the election of Pope Benedict XVI on 19 April 2005 and on 24 April he  bestowed the Petrine pallium during the mass for the inauguration of his pontificate.