Saint October 28 : St. Jude Apostle a Miraculous Intercessor and the Patron of the Impossible and Hospitals 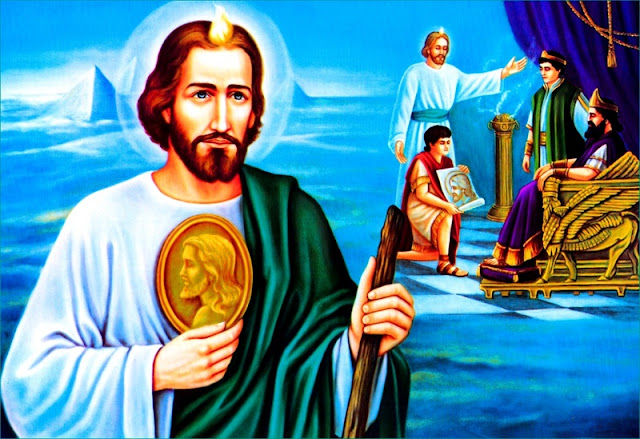 https://www.catholicnewsworld.com/2018/10/share-novena-to-st-jude-thaddeus.html
Saint Jude (1st century C.E.), also known as St. Judas or Jude Thaddeus, was one of the Twelve Apostles of Jesus, who is sometimes, the author of the Epistle of Jude. Mark and some manuscripts of Matthew identify him as "Thaddeus."
Luke names him as Judas, son of James, or in the King James Version: "Judas the brother of James" (Luke 6:16). Biography St. Jude was born into a Jewish family in Paneas, a town in Galilee later rebuilt by the Romans and renamed Caesarea Philippi. In all probability he spoke both Greek and Aramaic, like almost all of his contemporaries in that area, and was a farmer by trade. St. Jude was a son of Clopas and his wife Mary, a cousin of the Virgin Mary. Tradition has it that Jude's father, Clopas, was murdered because of his forthright and outspoken devotion to the risen Christ. Tradition holds that Saint Jude preached the Gospel in Judea, Samaria, Idumaea, Syria, Mesopotamia and Libya.
He is also said to have visited Beirut and Edessa, though the latter mission is also attributed to Thaddeus of Edessa, one of the Seventy. He is reported as suffering martyrdom together with Simon the Zealot in Persia. The fourteenth-century writer Nicephorus Callistus makes Jude the bridegroom at the wedding at Cana. Though Saint Gregory the Illuminator is credited as the "Apostle to the Armenians," when he baptised King Tiridates III of Armenia in 301 C.E., converting the Armenians, the Apostles Jude and Bartholomew are traditionally believed to have been the first to bring Christianity to Armenia, and are therefore venerated as the patron saints of the Armenian Apostolic Church.
Linked to this tradition is the Thaddeus Monastery. Symbol of his martyrdom According to the Armenian tradition, Saint Jude suffered martyrdom about 65 C.E. in Beirut, Lebanon together with the apostle Simon the Zealot, with whom he is usually connected. Their acts and martyrdom were recorded in an Acts of Simon and Jude that was among the collection of passions and legends traditionally associated with the legendary Abdias, bishop of Babylon, and said to have been translated into Latin by his disciple Tropaeus Africanus, according to the Golden Legend account of the saints. Saints Simon and Jude are venerated together in the Roman Catholic Church on October 28. Sometime after his death, Saint Jude's body was brought from Beirut, Lebanon to Rome and placed in a crypt in St. Peter's Basilica which is visited by many devotees. According to popular tradition, the remains of St. Jude were preserved in a monastery on an island in the northern part of Issyk-Kul lake in Kyrgyzstan at least until mid-fifteenth century. Iconography
St. Jude is traditionally depicted carrying the image of Jesus in his hand or close to his chest, denoting the legend of the Image of Edessa, recorded in apocryphal correspondence between Jesus and Abgarus which is reproduced in Eusebius' History Ecclesiastica, I, xiii. According to it, King Abgar of Edessa (a city located in what is now southeast Turkey) sent a letter to Jesus to cure him of an illness that afflicts him, and sent the envoy Hannan, the keeper of the archives, offering his own home city to Jesus as a safe dwelling place. The envoy either painted a likeness of Jesus, or Jesus, impressed with Abgar's great faith, pressed his face into a cloth and gave it to Hannan to take to Abgar with his answer. Upon seeing Jesus' image, the king placed it with great honor in one of his palatial houses. After Christ had ascended to heaven, St. Jude was sent to King Abgar by the Apostle St. Thomas. The king was cured and astonished. He converted to Christianity along with most of the people under his rule. Additionally, St. Jude is often depicted with a flame above his head. This represents his presence at Pentecost, when he received the Holy Spirit with the other apostles. Edited from New Encyclopedia