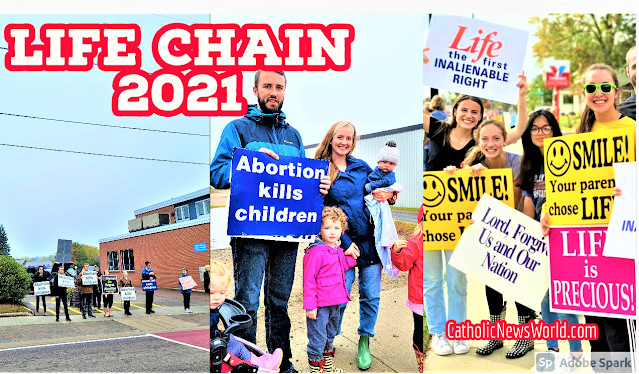 Thousands of People Lined the Streets in many Locations to Tell North Americans “Abortion Kills Children.”
Thousands of pro-lifers stood outside despite COVID-19 and the weather on Sunday, October 4, 2021 to pray for unborn babies and their mothers.
People gathered in nearly 1,600 communities in the United States and Canada for the annual Life Chain, according to organizers. The event brings pro-lifers together in their local communities to pray for an end to abortion and peacefully witness to the truth about life in the womb. Due to COVID-19 many pro-lifers maintained a social distance. (The following video shows images from the Socially Distanced Life Chain with Testimonies from participants)
Peaceful witnessing is a key part of the Life Chain. The events typically are held along busy roadways in the communities where pro-lifers hold signs that raise awareness about unborn babies, pregnancy resources and more.Every year, nearly 900,000 unborn children are killed in legal abortions in America, and organizers said the Life Chains are one small step toward ending the violence.The Life Chain began more than 30 years ago in California, and quickly grew into a national and international event with communities in Canada and the United States participating.While Life Chains are promoted as religious, prayer-oriented events, organizers said they also welcome non-religious pro-lifers to participate. Participants are encouraged to pray and/or solemnly reflect on the violence of abortion in a public place where they can witness to the truth about abortion in their community.More than 61 million unborn babies have been aborted legally in the United States since 1973.
With Infromation from LifeNews.com