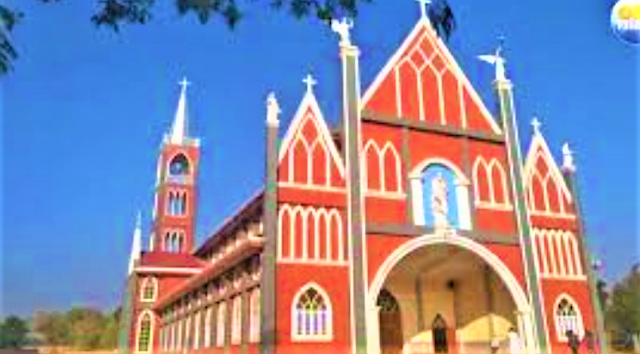 Agenzia Fides reports that some rockets and heavy weapon bullets fired by soldiers of the Burmese army hit the Catholic Cathedral of the Sacred Heart, in the diocese of Pekhon, in the southern part of the Shan State, in eastern Myanmar. As reported to Fides by Fr. Julio Oo, priest of the diocese of Pekhon, "it is an execrable act, to be condemned". "The church complex - reports Fr. Julio - is a place of refuge and security in the generalized instability of a violent conflict, given that, while there is fighting in the area, hundreds of local people are taking refuge in the Cathedral complex".

While local resistance militias are fighting the army 8 miles from the city, "such acts of gratuitous violence against civilians and places of worship increase frustration and youth protest against the army. We are concerned: churches are becoming more and more targets of attacks for military forces", added the priest.According to local sources in the Christian community, the army could specifically target churches because "they are the core of the community, by destroying them, the soldiers want to destroy the hope of the people". The population in the diocese of Pekhon is about 340 thousand inhabitants (many belonging to ethnic minorities such as Shan, Pa-Oh, Intha, Kayan, Kayah) and there are about 55 thousand Catholics.In other separate incidents, the military in Myanmar devastated and burned houses and a Baptist church in the village of Ral Ti in the municipality of Falam in the Burmese state of Chin in recent days.In clearing the rubble, a village Baptist pastor and community members miraculously found the Bibles and hymnbook intact.The army also burned 134 homes in the city of Thang Tlang, also in Chin state, setting fire to two other Christian churches, one Presbyterian and one Baptist, in retaliation against local rebels. A local Christian faithful, Lian Hmung Sakhon tells Fides: "With such violence, destroying and burning houses and churches, the army will not win, but it will create even greater hostility and rebellion among the civilian population and young people" (JZ-PA) (Source: Agenzia Fides, 10/11/2021)