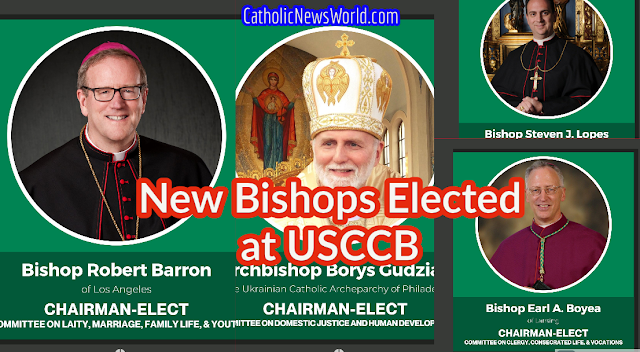 The US Bishops are holding their 1st in-person Assembly since the pandemic. Elections were held for some key leadership positions.
Here are the results of the 2022 Fall General Assembly election.
The bishops elected a new Conference treasurer and chairmen of five standing committees. The elected bishops will serve for one year as the treasurer-elect or as committee chairman-elect before beginning a three-year term that begins at the conclusion of the bishops’ 2022 Fall General Assembly. The bishops also elected 3 members to the Board of Catholic Relief Services (CRS), and a general secretary for the Conference.
Bishop James F. Checchio of Metuchen as treasurer-elect and chairman-elect of the Committee on Budget and Finance in a vote 135 to 106 over Archbishop Paul D. Etienne of Seattle.

Bishop Earl A. Boyea of Lansing as chairman-elect of the Committee on Clergy, Consecrated Life and Vocations in a 137-103 vote over Archbishop Samuel Aquila of Denver.

Bishop Steven J. Lopes of Personal Ordinariate of the Chair of Saint Peter as chairman-elect of the Committee on Divine Worship in a 121-120 vote over Archbishop Mitchell T. Rozanski of St. Louis.

Archbishop Borys Gudziak of Ukrainian Catholic Archeparchy of Philadelphia, as chairman-elect of the Committee on Domestic Justice and Human Development in a 125-116 vote over Bishop Thomas J. Paprocki of Springfield.

Bishop Robert Barron, Auxiliary Bishop of Los Angeles as chairman-elect of the Committee on Laity, Marriage, Family Life and Youth in a 140-103 vote over Bishop Edward J. Burns of Dallas.

Bishop Mark Seitz of El Paso as chairman-elect of the Committee on Migration in a 127-116 vote over Archbishop Thomas G. Wenski of Miami.

Reverend Michael J. K. Fuller, STD was elected as General Secretary of the USCCB in a vote over Reverend Daniel Hanley. The general secretary’s term is five years.

Additionally, 3 members of the Board of Directors for Catholic Relief Services were elected from a slate of 4 candidates. They are (alphabetical order):

Archbishop Timothy Broglio, Bishop Donald J. Hying, and Bishop Oscar Solis were elected to the board for @CatholicRelief. #USCCB21 pic.twitter.com/hWsZxUlIgS