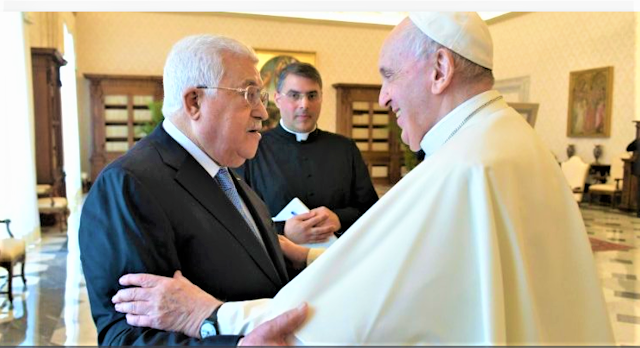 Pope Francis met President Mahmoud Abbas, of the State of Palestine, and during the 55-Minute meeting they discussed the need for dialogue between Palestine and Israel to achieve a two-state solution. (See Video below)

Today, 4 November 2021, the Holy Father Francis received in audience His Excellency Mr. Mahmoud Abbas, President of the State of Palestine, who subsequently met with His Eminence Cardinal Secretary of State Pietro Parolin, accompanied by His Excellency Archbishop Paul Richard Gallagher, Secretary for Relations with States.

During the cordial talks in the Secretariat of State, the good relations between the Holy See and the State of Palestine were acknowledged, and bilateral issues of mutual interest were addressed. In addition, the need to promote human brotherhood and peaceful coexistence among the various faiths was acknowledged. With regard to the peace process between Israelis and Palestinians, it was stressed that it is absolutely necessary to reactivate direct dialogue in order to achieve a two-state solution, also with the help of more vigorous effort on the part of the international community. Lastly, it was reiterated that Jerusalem must be recognised by all as a place of encounter and not of conflict, and that its status must preserve its identity and universal value as a Holy City for all three Abrahamic religions, also through a special internationally guaranteed status.

Finally, attention turned to the urgency of working for peace, avoiding the use of weapons, and combating all forms of extremism and fundamentalism.

Pope Francis gifted Mr. Abbas a bronze plaque of two hands in a friendly grip. Depicted in the background is the colonnade of St. Peter’s Square, a woman with a child, a migrant boat, and the words (in Italian) “Let us fill our hands with other hands” emblazoned on the bottom of the plaque.

The Pope also gave the president a book of papal documents and copies of his message for peace for this year, the Document on Human Fraternity, and a book on the Statio Orbis of 27 March 2020, published by the Vatican Publishing House.

President Abbas gifted the Pope with a book on the Church of the Nativity, in Bethlehem, and a representation of the Grotto of the Nativity in amber.