Pope Francis Sends Letter to Bishops of France at Plenary Assembly “Do not doubt that the people of France await the Good News of Christ, they need it..." 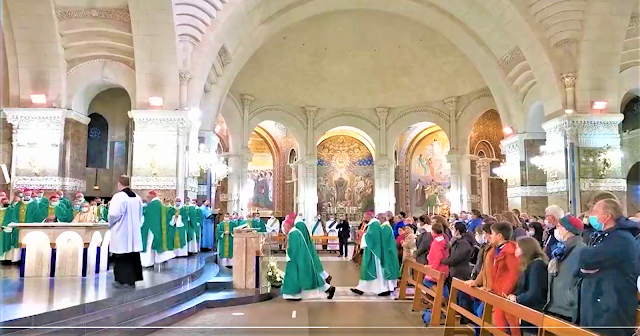 Pope Francis sent a letter message to Bishops of France as they meet for their General Assembly from the 2nd to the 8th of November 2021.
According to Vatican News, he invites them to bear, with faith and hope, the burden of the difficult times experienced by the Church due to the scandal of sexual abuse.
The Bishops of France are participating in their Plenary Assembly, which is taking place in Lourdes from 2 – 8 November.
In the letter addressed to the President of the French Bishops’ Conference, Archbishop Eric de Moulins-Beaufort of Reims, the Holy Father recalled the bishops’ recent Ad limina visit to Rome, and the fraternal exchanges that took place during the meeting. He also assured them of his closeness and prayer as they open the Plenary Assembly under the protection of Our Lady.
Encouragement amid difficult times
The Bishops’ General Assembly comes a month after the submission of a report by the Independent Commission on Sexual Abuse in the Church (CIASE) which estimated that about 330,000 people living in France have been victims of sexual abuse within the Church from 1950 - 2020.
Turning his thoughts to the difficult moments experienced by the Church due to the scandal of sexual abuse, Pope Francis encouraged the bishops to carry their “burden with faith and hope,” adding that he too carries it with them.
He expressed confidence that together, and under the guidance of the Spirit, the Bishops will find ways to honour and console the victims, exhort all believers to penance and conversion, take steps to make the Church a safe place for all, take care of the wounded and scandalized, and, finally, with eyes turned toward the future, take up the mission with joy.
The Holy Father also assured them of the support and communion of the Apostolic See amid the “trials and contradictions” that the Church in France is undergoing.
“Do not doubt that the people of France await the Good News of Christ, they need it more than ever,” the Pope said in the letter.
For this reason, the Holy Father entrusts with “particular tenderness” to the paternal solicitude of the bishops, the immense majority of priests who “fulfill their ministry with generosity and dedication, and whose beautiful vocation is, unfortunately, being sullied.”
“They need to be strengthened and supported at the difficult time,” Pope Francis added.
He went on to express pleasure that the Bishop’s General Assembly will address other important topics that are dear to his heart, including the care for our common home and ecumenism.
Concluding, the Holy Father reiterated his expression of closeness and support for the Bishops of France and entrusted them, as well as their particular Churches, to the intercession of Our Lady.
Edited from Vatican News - Screenshot - Eglise de la France Youtube