Saint November 2 : All Souls' Day Explained in 2 Min. - Remembering all the Faithfully Departed with Prayer - VIDEO 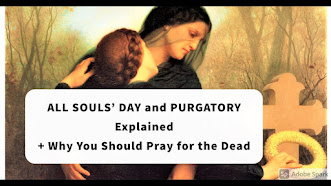 All Souls Day or the commemoration of all the faithful departed is celebrated by the Church on 2 November, or, if this be a Sunday or a solemnity, on 3 November. (See Video Below)
The theological basis for the feast is the doctrine that the souls which, on departing from the body, are not perfectly cleansed from venial sins, or have not fully atoned for past transgressions, are debarred from the Beatific Vision, and that the faithful on earth can help them by prayers, alms deeds and especially by the sacrifice of the Mass.  PURGATORY, (from the Latin, "purgare", to make clean, to purify) in accordance with Catholic teaching is a condition of temporal punishment for those who, departing this life in God's grace, are, not entirely free from venial faults, or have not fully paid the satisfaction due to their transgressions.)
The Catechism explains,  "All who die in God's grace and friendship,  but still imperfectly purified,  are indeed assured of their eternal salvation; but after death they undergo purification,  so as to achieve the holiness necessary to enter the joy of heaven. " 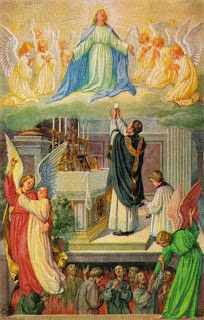 The Church gives the name Purgatory to this final purification of the elect,  which is entirely different from the punishment of the damned.  The Church formulated her doctrine of faith on Purgatory especially at the Councils of Florence and Trent.
In the early days of Christianity the names of the departed brethren were entered in the diptychs. Later, in the sixth century, it was customary in Benedictine monasteries to hold a commemoration of the deceased members. A time-honoured ceremony of praying to the dead on 1 October. This was accepted and sanctified by the Church. St. Odilo of Cluny (d. 1048) ordered the commemoration of all the faithful departed to be held annually in the monasteries of his congregation. Thence it spread among the other congregations of the Benedictines and among the Carthusians.
A PLENARY INDULGENCE,  applicable only to the souls in purgatory,  is granted to the faithful who on any and each day from November 1 to 8, devoutly visit a cemetery and pray,  if only mentally,  for the departed; On All Souls' Day it is granted to those who devoutly visit a church or an oratory and recite an Our Father and the Creed.   (or from home if unable to visit. )
This has been extended for the entire month of November in 2021.
Prayer for the Dead
Eternal Father,  I offer You the most precious blood of thy Divine Son,  Jesus,  in union with the Masses said throughout the world today,  for all the Holy Souls in Purgatory,  for sinners everywhere,  for sinners in the universal church,  for those in my own home and in my family.  Amen.
This prayer was given to a Nun named Saint Gertrude by Our Lord and legend says it frees 1,000 souls.