Saint November 27 : Our Lady of the Miraculous Medal from the Vision of Saint Catherine of Labouré 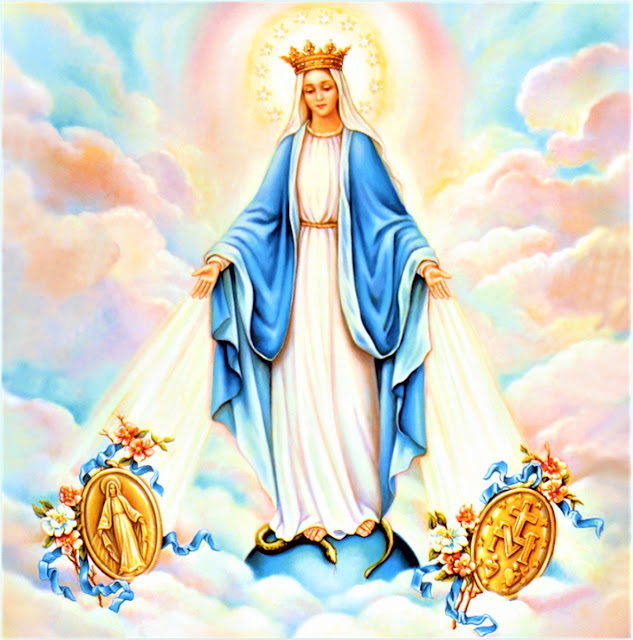 November 27 is the feast of the miraculous medal. The miraculous medal (French: Médaille miraculeuse), also known as the Medal of the Immaculate Conception, is a medal, the design of which was originated by Saint Catherine Labouré following her vision of the Blessed Virgin Mary and made by goldsmith Adrien Vachette. November 27 marks the anniversary of the Medal of the Immaculate Conception, known as the Miraculous Medal. This aided the Church's official declaration of the dogma in 1854. On the front is written: "O Mary, conceived without sin, pray for us who have recourse to thee." On the reverse, twelve stars surround a large "M," from which a cross arises. Below the "M," the medal depicts two flaming hearts.

The left heart, circled with thorns, represents Jesus. The right heart, pierced by a sword, symbolizes Mary. A 24-year-old novice, received the visions, in the community of Sisters known as the Daughters of Charity, Paris, France, in 1830. On July 18, 1830, a child awakened Sister Catherine Laboure. The child lead her to the convent's chapel where the Virgin Mary was sitting in a chair. She kneels beside Mary. A little more than four months later, during her evening meditation on Nov. 27, 1830, Catherine had a vision of Mary. Mary said, "Have a medal struck upon this model. Those who wear it will receive great graces, especially if they wear it around their neck."

The first medals were made in 1832 and distributed throughout Paris.  In 1836, a Church investigation declared the apparitions to be genuine.
What does the medal mean?
The Front Side • Mary stands on a globe, crushing a serpent beneath her feet. Describing the original vision, Catherine said the Blessed Mother appeared radiant as a sunrise, " • Rays shoot out from Mary's hands, which she told Catherine, "... symbolize the graces I shed upon those who ask for them." • Words from the vision form an oval frame around Mary: "O Mary, conceived without sin, pray for us who have recourse to thee." Seen as a matrix, the elements of the front design encapsulate major Marian tenets: • Immaculate The words, "conceived without sin" • Assumed into Heaven She stands on the globe • Mediatrix Rays from her hands symbolizing "graces" The Reverse Side • A cross-and-bar surmounts a large, bold "M" • 12 stars disperse around the perimeter • Two hearts are depicted underneath the "M," the left lapped with a crown of thorns, the right skewed by a sword. From each, a flame emanates from the top. Again, employing a grid analysis, we can see how the reverse-side design contains great symbolism reflecting major tenets of the Catholic faith. Design Element and its Catholic Meaning • The large letter "M" — Mary as Mother, Mediatrix. • Cross and bar — Jesus' cross of Redemption. • 12 stars — 12 Apostles, who formed the first Church. • Left Heart — The Sacred Heart, who died for our sins. • Right Heart — The Immaculate Heart, who intercedes for us. • Flames — The burning love Jesus and Mary have for us. It is "a testimony to faith and the power of trusting prayer. Its greatest miracles are those of patience, forgiveness, repentance, and faith."
Source: Association of the Miraculous Medal