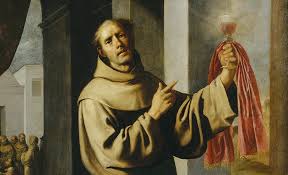 FRANCISCAN FRIAR AND MISSIONARY
Born:
1391, Monteprandone, Marche of Ancona, Italy
Died:
November 28, 1476
Canonized:
10 December 1726 by Pope Benedict XIII
Major Shrine:
Franciscan church of St. Maria la Nuova
Patron of:
Patron of the city of Naples, Italy
Franciscan, born of a poor family named Gangala, at Monteprandone, March of Ancona, Italy, 1391; d. at Naples, 28 Nov., 1476. He is generally represented holding in his right hand a chalice, out of which a snake is escaping --an allusion to some endeavours of heretics to poison him or, less likely, to the controversy about the Precious Blood.
He began his studies at Offida under the guidance of his uncle, a priest, who soon afterwards put him to school at Ascoli. At the University of Perugia he took the degree of Doctor in Civil Law. After a short stay at Florence as tutor in a noble family, and as judge of sorcerers, James was received into the Order of the Friars Minor, in the chapel of the Portiuncula, Assisi, 26 July, 1416. Having finished his novitiate at the hermitage of the Carceri, near Assisi, he studied theology at Fiesole, near Florence, under St. Bernardine of Siena. On 13 June, 1420, be was ordained priest, and soon began to preach in Tuscany, in the Marches, and Umbria; for half a century he carried on his spiritual labours, remarkable for the miracles he performed and the numerous conversions he wrought. From 1427 James preached penance, combated heretic, and was on legations in Germany, Austria, Sweden, Denmark, Bohemia, Poland, Hungary, and Bosnia. In the last-mentioned country he was also commissary of the Friars Minor. At the time of the Council of Basle he promoted the union of the moderate Hussites with the Church, and that of the Greeks it the Council of Ferrara-Florence. Against the Turk, he preached several crusades, and at the death of St. John Capistran, in 1456, James was sent to Hungary as his successor. In Italy he fought the Fraticelli, instituted several montes pietatis, and preached in all the greater cities; Milan offered him the bishopric in 1460, which he declined. St. James belonged to the Observant branch of the Friars Minor, then rapidly spreading and exciting much envy. How much he suffered on this account is shown in a letter written by him to St. John Capistran, published by Nic. Dal-Gal, O.F.M., in "Archivum Franciscanum Historicum", I (1908), 94-97. Under Callistus III, in 1455, he was appointed an arbiter on the questions at issue between Conventuals and Observants. His decision was published 2 Feb., 1456, in a papal Bull, which pleased neither part . A few years later, on Easter Monday, 1462, St. James, preaching at Brescia, uttered the opinion of some theologians, that the Precious Blood shed during the Passion was not united with the Divinity of Christ during the three days of His burial. The Dominican James of Brescia, inquisitor, immediately cited him to his tribunal. James refused to appear, and after some troubles appealed to the Holy See. The question was discussed at Rome, Christmas, 1462 (not 1463, as some have it), before Pius II and the cardinals, but no decision was given. James spent the last three years of his life at Naples, and was buried there in the Franciscan church of S. Maria la Nuova, where his body is still to be seen. Beatified by Urban VIII, 1624, he was canonized by Benedict XIII, 1726. Naples venerates him as one of its patron saints (feast, 28 Nov.).
The works of St. James of the Marches have not as yet been collected. His library and autographs are preserved in part at the Municipio of Monteprandone (see Crivellucci, "I codici della libreria raccolta da S. Giacomo della Marca nel convento di S. Maria delle Grazie presso Monteprandone", Leghorn, 1889). He wrote "Dialogus contra Fraticellos" printed in Baluze-Mansi, "Miscellanea", II, Lucca, 1761, 595-610 (cf. Ehrle in "Archiv für Litt. u. Kirchengeschichte", IV, Freiburg im Br., 1888, 107-10). His numerous sermons are not edited. For some of them, and for his treatise on the "Miracles of the Name of Jesus", see Candido Mariotti, O.F.M., "Nome di Gesù ed i Francescani", Fano, 1909, 125-34. On his notebook, or "Itinerarium", See Luigi Tasso, O.F.M., in "Miscellanea Francescana", I (1886), 125-26: "Regula confitendi peccata" was several times edited in Latin and Italian during the fifteenth century. "De Sanguine Christi effuse" and some other treatises remained in manuscript.
SOURCE The Catholic Encyclopedia