Saint November 5 : Blessed Solanus Casey - a Franciscan Capuchin Priest of Detroit who was Not Allowed to Preach at Mass 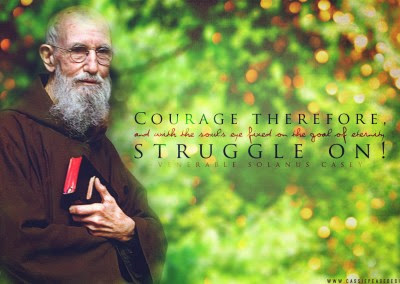 American Catholic (Image CassiePeaDesigns): Blessed Solanus Casey (1870-1957) Barney Casey became one of Detroit’s best-known priests even though he was not allowed to preach formally or to hear confessions! Barney came from a large family in Oak Grove, Wisconsin. At the age of 21, and after he had worked as a logger, a hospital orderly, a streetcar operator and a prison guard, he entered St. Francis Seminary in Milwaukee—where he found the studies difficult. He left there and, in 1896, joined the Capuchins in Detroit, taking the name Solanus. His studies for the priesthood were again arduous. On July 24, 1904, he was ordained, but because his knowledge of theology was judged to be weak, Father Solanus was not given permission to hear confessions or to preach. A Franciscan Capuchin who knew him well said this annoying restriction "brought forth in him a greatness and a holiness that might never have been realized in any other way."
During his 14 years as porter and sacristan in Yonkers, New York, the people there recognized him as a fine speaker. "For, though he was forbidden to deliver doctrinal sermons," writes his biographer, James Derum, "he could give inspirational talks, or feverinos, as the Capuchins termed them" (18:96). His spiritual fire deeply impressed his listeners. Father Solanus served at parishes in Manhattan and Harlem before returning to Detroit, where he was porter and sacristan for 20 years at St. Bonaventure Monastery.
Every Wednesday afternoon he conducted well-attended services for the sick. A co-worker estimates that on the average day 150 to 200 people came to see Father Solanus in the front office. Most of them came to receive his blessing; 40 to 50 came for consultation. Many people considered him instrumental in cures and other blessings they received. Father Solanus’ sense of God’s providence inspired many of his visitors. "Blessed be God in all his designs" was one of his favorite expressions. The many friends of Father Solanus helped the Capuchins begin a soup kitchen during the Depression. Capuchins are still feeding the hungry there today. In 1946 in failing health, he was transferred to the Capuchin novitiate in Huntington, Indiana, where he lived until 1956 when he was hospitalized in Detroit. He died on July 31, 1957. An estimated 20,000 people passed by his coffin before his burial in St. Bonaventure Church in Detroit. At the funeral Mass, the provincial Father Gerald said: "His was a life of service and love for people like me and you. When he was not himself sick, he nevertheless suffered with and for you that were sick. When he was not physically hungry, he hungered with people like you. He had a divine love for people. He loved people for what he could do for them—and for God, through them." In 1960 a Father Solanus Guild was formed in Detroit to aid Capuchin seminarians. By 1967 the guild had 5,000 members—many of them grateful recipients of his practical advice and his comforting assurance that God would not abandon them in their trials. He was declared Venerable in 1995.
Comment: James Patrick Derum, his biographer, writes that eventually Father Solanus was weary from bearing the burdens of the people who visited him. "Long since, he had come to know the Christ-taught truth that pure love of God and one’s fellowmen as children of God are in the final event all that matter. Living this truth ardently and continuously had made him, spiritually, a free man—free from slavery to passions, from self-seeking, from self-indulgence, from self-pity—free to serve wholly both God and man" (The Porter of St. Bonaventure’s, page 199).
Quote: Father Maurice Casey, a brother of Father Solanus, was once in a sanitarium near Baltimore and was annoyed at the priest-chaplain there. Father Solanus wrote his brother: "God could have established his Church under supervision of angels that have no faults or weaknesses. But who can doubt that as it stands today, consisting of and under the supervision of poor sinners—successors to the ‘poor fishermen of Galilee’ #151; the Church is a more outstanding miracle than any other way?"
Shared from : AmericanCatholic