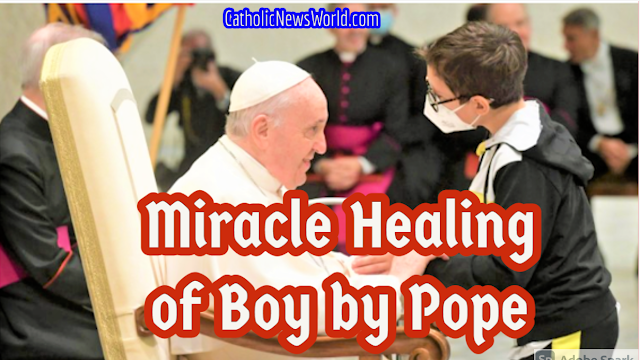 In October, a young boy was in the news for spontaneously marching on the stage where Pope Francis was giving his general audience. The mother now claims that Pope Francis performed a miracle for her son who walked onstage at the Vatican. This is what the mother revealed in an interview with CBS to their evening-news.    Paolo Bonavita, is the 10-year-old Italian boy who approached Pope Francis and asked for his white skull cap.
Bonavita, who has autism and epilepsy, walked onto the stage in October, pointing at the Pope's zucchetto. Paolo was given a seat next to Francis, and, his mother explained, the cap off the pope's head. The mother, Elsa brought the boy to Rome for medical tests after doctors suspected a tumor or multiple sclerosis. But Paolo was somehow able to climb the stairs in Paul VI Audience Hall to reach the pope without help. His mother Elsa Morra explained, "Climbing stairs by himself, when he normally needs help, I thought, 'This can't be happening,'" she told CBS News. "The doctor was almost certain it was a brain tumor," Morra said. The Holy Father, Pope Francis told Elsa would pray for her son. "He took my hand and said, 'For you, the impossible does not exist,'" she said. About three weeks later, she became aware what he meant: She claims doctors told her her son's test results showed no sign of cancer, and his condition had improved. "Thank you for the miracle," she said of what she'd tell the pope. Source: CBS