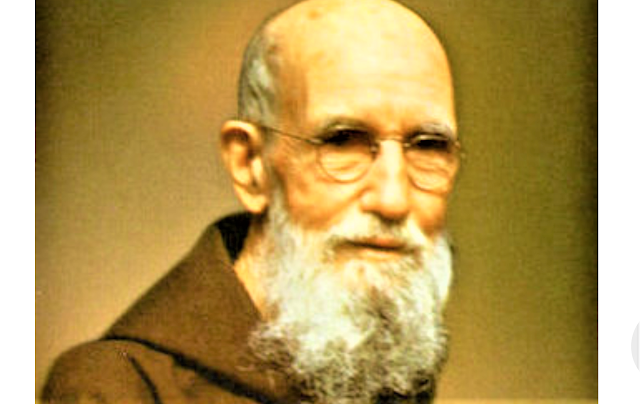 Diocese of Lansing Press Release: A married father-of-three from the Diocese of Lansing claims that Blessed Solanus Casey (1870 – 1957) visited him twice in hospital and hastened, what he believes to be, a miraculous recovery from COVID-19. 52-year-old construction worker, Nolan Ostrowski, who is a parishioner at Saint Peter in Eaton Rapids, was admitted to Sparrow Hospital in Lansing on July 25.

“And then, one night, I was sitting there and I woke up and I felt like there was a lot of darkness around me, a lot of despair over me, and I noticed there was somebody sitting at the side of my headboard and I couldn't turn to see who it was – all I could see were their legs, and his brown robe and, at that time, I thought it was my guardian angel,” recalls Nolan upon a return visit to Sparrow Hospital, November 1.

That apparent visitation occurred on July 30, the Feast of Blessed Solanus Casey.

The following night, July 31, the same figure in brown robes appeared again in Nolan’s hospital room although, this time, he was sat at the foot of his bed with his hands on his thighs.

“He sat there and that's when I realized that this is a this isn't just my guardian. This is a saint. This is someone special,” says Nolan who responded by vocally praying and then, he says, “to plead for my life” and to explain that he didn’t want his children raised without him.

“There was no response from him. It was like I was talking to a statue. Nothing. And then I said, ‘Well, if you save me, I'll never use God's name in vain again’. And he jumped up like he won the Lotto. I mean, it was kind of startling. And he ran around the side of my bed. And when he ran, it was like a skipping floating motion.”

“And he reached out and he touched my rib cage under my arm and then at the bottom of my rib cage, I remember kind of lifting my arm a little bit, but it was all very quick, and then he just stepped back a couple steps and I felt like there was this ease that came over me and I felt very relaxed and comfortable. I knew I was saved.”

The following day, Nolan’s wife, Kathleen, showed him a photograph of Blessed Solanus Casey. Nolan instantly recognized him as the saint who had twice visited him and laid hands upon his rib cage.

Father Solanus Casey was a Capuchin priest who was based for much of his life at Saint Bonaventure Monastery in Detroit. He was known during his lifetime as a wonderworker, for his great faith, and for his abilities as a spiritual counselor, but especially for his great attention to the sick. He was beatified at a ceremony held at Ford Field in Detroit in 2017.

The Ostrowski family and their friends had been praying to Blessed Solanus in the days prior to the events of July 30-31 although Nolan says he “didn't really know what he was about or what he had done”.

On August 3, Nolan’s condition deteriorated such that he was put on a ventilator and placed into an induced coma. Two days later he was airlifted to Lutheran Hospital in Fort Wayne, Indiana, where he was placed on an Extracorporeal Membrane Oxygenation or ECMO machine which operates an artificial lung for patients with severe respiratory issues.

“I knew once he was there, even though it was a roller coaster while he was there, that he was there to get better, that that's where God sent him to heal,” says Kathleen who had been entrusted with the decision as to where Nolan should receive further treatment.

As it happens, the hospital in Fort Wayne is situated only 20 miles away from the former Saint Felix Friary in Huntington where Blessed Solanus spent most of the last 10 years of his life in retirement. After a month, Nolan was able to walk again with the help of the ECMO machine.

“And the other doctors in the ICU, they said it was a miracle and they couldn't believe how well I was doing. They took me off the ventilator. I was able to breathe on my own, non-stop. They didn't have to put me back on it [during the day]. And they said that never happens,” says Nolan.

“I still sometimes struggle with a lack of breath but for the most part, and it's only been a couple months since I've been off that ECMO machine, I am doing very well – and I think it's because of the intervention that occurred to me.”

On October 1, Nolan returned home to his family in Eaton Rapids. Since then the family have made a pilgrimage of thanksgiving to the tomb of Blessed Solanus Casey in Detroit.

They have also written to those responsible for promoting Blessed Solanus’ cause of canonization. It is a cause that requires one more attributable miracle in order for “Blessed Solanus” to be declared as “Saint Solanus” by the Vatican.

“Well, I feel like it's gonna happen regardless. If is my part in it to make it happen, it would be great,” says Nolan. Adds Kathleen, “It would be great but I also feel that Solanus will keep doing what he's doing, and he's obviously not done, so if Nolan’s miracle is it that would be great – but it'll happen.”

Update: In recent days the Ostrowski family have been contacted by those responsible for promoting Blessed Solanus’ cause of canonization to thank them for sharing their story.

They explain, however, that after consulting with their advisory physicians they won’t be pursuing Nolan’s recovery as an official miracle due to the fact that there may be some medical explanation for his recovery, as remote that that explanation may be.

They also stress, though, that their decision does not diminish from the great favor Nolan received, the grace of his encounter with Blessed Solanus and the wonder of his recovery. Nolan’s story will also be kept on file as part of the canonization process.

Blessed Solanus Casey, pray for us!