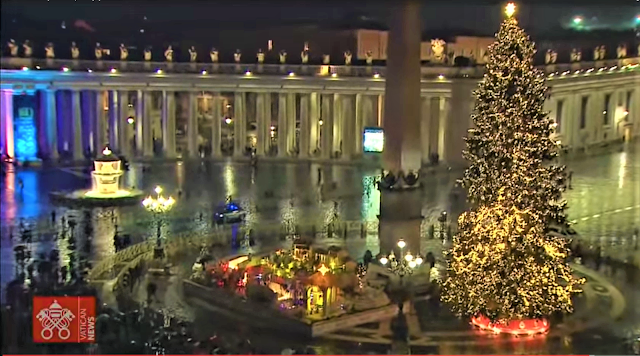 The inauguration of the Nativity scene and Christmas tree occurred at the Vatican. Constant rain resulted that most of the participants watched from Paul VI hall. The Christmas tree is from Andalo, in northern Italy, and the Nativity scene is from the Huancavelica region in the Peruvian Andes. -"The tree and Nativity scene aim to unite races, cultures and languages, to express the universal call to holiness." A carol was sung in Quechua by a choir of altar boys from Huancavelica. The choir was unable to travel to the Vatican, so they performed virtually.
The Bishop of Huancavelica, Carlos Salcedo Ojeda recited a prayer especially for people affected by the pandemic. A delegation from Peru, including the regional governor of Huancavelica, Maciste Díaz Abad and the Minister of Foreign Affairs, Oscar Maúrtua de Romaña were at the Vatican.
A little girl pressed the button to light up the Nativity Scene. A crowd  gathered in St. Peter's Square for the highly anticipated moment.
As the the tree was lighted the Vatican band's played  “Silent Night.” The secretary of the Governorate of Vatican City State, Sr. Raffaella Petrini, concluded the event. She invited everyone during the Christmas season to contemplate the message of peace and fraternity communicated by the Nativity Scene and Christmas tree. -"It's an invitation to fix our gaze on the Nativity scene, as a reflection of that profound human desire for reciprocity, to care for the fragility and vulnerability that characterizes us all."
The Nativity Scene and Christmas tree will remain in St. Peter's Square until Jan. 9, 2022.
The Christmas tree is a 90-feet tall red fir tree from Andalo, in the Trentino region of northern Italy. This year's nativity scene is composed of 35 figures representing its landscape and its people. The Pope did not attend the event, but on Dec. 31, he usually goes to St. Peter's Square to look at it.