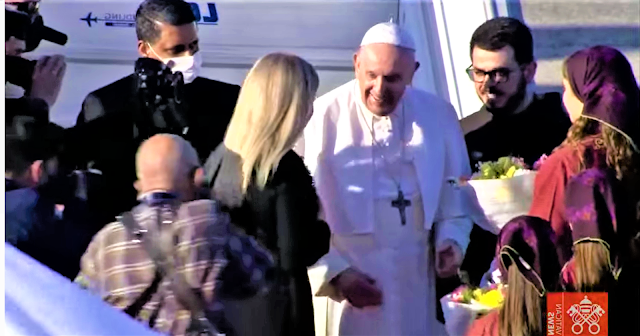 Pope arrives in Cyprus, on his 35th Apostolic Journey abroad as Pope, from December 2 to 6. After 2 days in Cyprus, he will proceed to Greece before flying back to Rome on Monday.
The papal flight was 3-hours from Rome on an A320 plane of Italy’s new state-owned flag carrier ITA Airways. He landed at Larnaca airport in Cyprus at 3:00 pm in the afternoon.
After the Pope’s plane stopped in front of the “Head of State Executive Terminal”, Apostolic Nuncio Archbishop Tito Yllana went up the steps to greet the Pontiff inside the aircraft.  The President of the House of Parliament accompanied by 3 children in traditional dresses, encountered the Pope on the tarmac and he was offered flowers in welcome.  After the guard of honour, the Pontiff and the President of the Parliament introduced members of their respective delegations.
The Pope was driven some 50 kilometres to the Cathedral of Our Lady of Graces in the capital Nicosia, the see of the Maronite Catholic Archdiocese of Cyprus, where he was to address priests, religious, deacons, catechists and ecclesial associations and movements of Cyprus.

This is the second visit by a Pope to Cyprus after that of Pope Benedict XVI in 2010.  The motto of Pope Francis’ trip to Cyprus is, “Comforting each other in the faith”, taken from the First Letter of St. Paul to Timothy.
Eighty per cent of Cyprus’ 850,000 people are Christians, with Catholics numbering some 38,000, or about 4.47 per cent of the population.  Muslims make up 2 per cent. The majority of Cypriots are Greek Orthodox.
St. Paul visited Cyprus in the first century AD and converted the island’s Roman governor Sergius Paulus to Christianity.
Below is the schedule of the rest of the Pope’s programme in Cyprus,
Dec 2-4