Pope Francis says "...God has not abandoned his people, that God has come, that God is close, he is God-with-us." FULL TEXT at New Year's Eve Vespers + Video 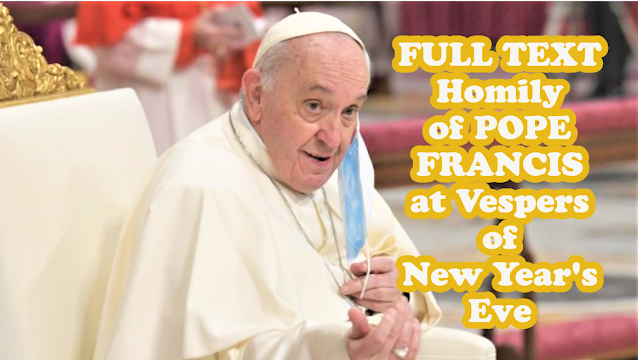 FIRST VESPERS OF THE SOLEMNITY OF MARY, MOTHER OF GOD

AND  TE DEUM OF THANKSGIVING FOR THE LAST  YEAR

In these days the Liturgy invites us to awaken in ourselves the amazement, the amazement at the mystery of the Incarnation. The feast of Christmas is perhaps the one that most arouses this interior attitude: amazement, wonder, contemplation ... Like the shepherds of Bethlehem, who first receive the luminous angelic announcement and then run and actually find the sign that it was theirs. indicated, the Child wrapped in swaddling clothes in a manger.

But not only them, even Mary and Joseph are full of holy wonder at what the shepherds say they heard from the angel about the Child.

That's it: Christmas cannot be celebrated without amazement. But an amazement that is not limited to a superficial emotion - this is not amazement -, an emotion linked to the exteriority of the party, or worse still to the consumerist frenzy. No. If Christmas is reduced to this, nothing changes: tomorrow will be the same as yesterday, next year will be like the past one, and so on. It would mean warming up for a few moments to a flash in the pan, and not exposing ourselves with our whole being to the force of the Event, not grasping the center of the mystery of the birth of Christ.

And the center is this: "The Word became flesh and dwelt among us" ( Jn 1:14). We hear it repeated several times in this evening liturgy, which opens the solemnity of Mary Most Holy Mother of God. She is the first witness, the first and the greatest, and at the same time the humblest. The greatest because the humblest. His heart is filled with amazement, but without a shadow of romanticism, of sweetness, of spiritualism. No. The Mother brings us back to the reality, to the truth of Christmas, which is contained in those three words of Saint Paul: "born of a woman" ( Gal 4: 4). Christian wonder does not originate from special effects, from fantastic worlds, but from the mystery of reality: there is nothing more wonderful and astonishing than reality! A flower, a clod of earth, a life story, an encounter ... The wrinkled face of an old man and the newly blossomed face of a child. A mom holding her baby in her arms and breastfeeding him. The mystery shines through there.

Brothers and sisters, the amazement of Mary, the amazement of the Church is full of gratitude . The gratitude of the Mother who, contemplating the Son, feels God's closeness, feels that God has not abandoned his people, that God has come, that God is close, he is God-with-us. The problems have not disappeared, the difficulties and worries are not lacking, but we are not alone: ​​the Father "sent his Son" ( Gal 4: 4) to redeem us from the slavery of sin and restore our dignity as children. He, the Only Begotten, became the firstborn among many brothers, to lead all of us, lost and scattered, back to the Father's house.

This pandemic time has increased the sense of bewilderment around the world. After a first phase of reaction, in which we felt solidarity on the same boat, the temptation to "save whoever can" spread. But thank God we reacted again, with a sense of responsibility. Truly we can and must say “thanks be to God”, because the choice of joint responsibility does not come from the world: it comes from God; indeed, it comes from Jesus Christ, who has imprinted once and for all in our history the "route" of his original vocation: to be all sisters and brothers, children of the one Father.

Rome, this vocation, the door written in the heart. In Rome it seems that everyone feels like brothers; in a certain sense, everyone feels at home, because this city holds within itself a universal opening. I dare to say: it is the universal city. It comes from its history, from its culture; it comes mainly from the Gospel of Christ, who here took deep roots fertilized by the blood of the martyrs, starting with Peter and Paul.

Rome is a wonderful city, which never ceases to enchant; but for those who live there it is also a tiring city, unfortunately not always dignified for citizens and guests, a city that at times seems to reject. The hope then is that everyone, those who live there and those who stay there for work, pilgrimage or tourism, can all appreciate it more and more for the care of hospitality, of the dignity of life, of the common home, of the most fragile and vulnerable. May everyone be amazed by discovering in this city a beauty that I would say "coherent", and that arouses gratitude. This is my wish for this year.

Sisters and brothers, today the Mother - Mother Mary and Mother Church - shows us the Child. He smiles at us and tells us: “He is the Way. Follow him, have confidence. He does not disappoint ”. Let us follow him on the daily journey: He gives fullness to time, gives meaning to works and days. We have confidence, in happy and painful moments: the hope that He gives us is the hope that never disappoints.