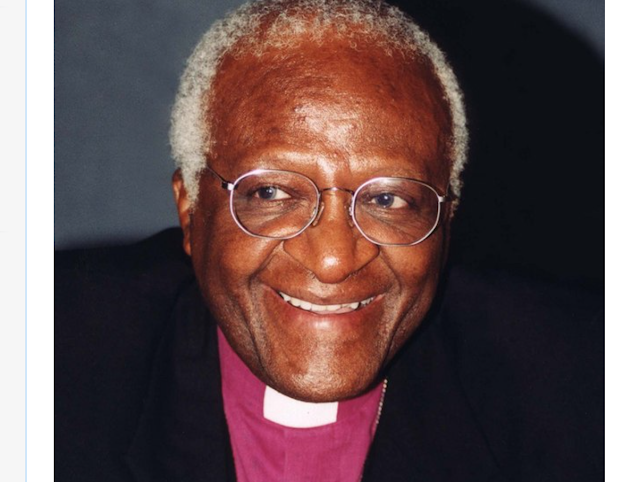 Archbishop Emeritus Desmond Mpilo Tutu, the a South African Anglican bishop and theologian, has died at age 90. He was famous for his work as an anti-apartheid and human rights activist. Tutu was the bishop of Johannesburg from 1985 to 1986 and then the archbishop of Cape Town from 1986 to 1996, in both cases being the first black African to hold the position.  He died on December 26, 2021, Cape Town, South Africa. Tutu was born on October 7th, 1931, Klerksdorp, South.  His wife was named, Nomalizo Leah Tutu (m. 1955–2021). Their children were Mpho Andrea Tutu, Naomi Nontombi Tutu, Trevor Thamsanqa Tutu, Theresa Thandeka Tutu.Pope Francis sent a Telegram of Condolences via Card. Parolin :

To The Most Reverend Peter B. Wells

His Holiness Pope Francis Was Saddened To Learn Of The Death Of Archbishop Desmond Tutu, And He Offers Heartfelt Condolences To His Family And Loved Ones. Mindful Of His Service To The Gospel Through The Promotion Of Racial Equality And Reconciliation In His Native South Africa, His Holiness Commends His Soul To The Loving Mercy Of Almighty God. Upon All Who Mourn His Passing In The Sure And Certain Hope Of The Resurrection, Pope Francis Invokes The Divine Blessings Of Peace And Consolation In The Lord Jesus.

Statement from the Anglican Church of Southern Africa:
Archbishop Emeritus Desmond Tutu - Announcement
Announcement by the Most Revd Dr Thabo Makgoba, Archbishop of Cape Town and Metropolitan of the Anglican Church of Southern Africa
It is with great sadness that I have to announce that our dearly beloved Archbishop Emeritus of Cape Town – and the 1984 Nobel Peace laureate – Desmond Mpilo Tutu died a short while ago at the age of 90.
On behalf of the Anglican Church of Southern Africa, the whole faith community, and – I make bold to say – on behalf of millions across South Africa, Africa and the world, I extend our deepest condolences to his wife, Nomalizo Leah, to his son, Trevor Tamsanqa, and to his daughters, Thandeka, Nontombi and Mpho, and all of their families.
While we mourn his passing, as Christians and people of faith we must also celebrate the life of a deeply spiritual person whose alpha and omega – his starting point and his ending point – was his relationship with our Creator. He took God, God's purpose and God's creation deadly seriously. Prayer, the Scriptures and his ministry to the people God entrusted to his care were at the heart of his life.
He believed totally that each one of us is made in the image of God and ought to be treated as such by others. This belief was not reached through celebral contemplation; it arose from his faith and was held with a deeply-felt passion. He wanted every human being on earth to experience the freedom, the peace and the joy that all of us could enjoy if we truly respected one another as people created in the image of God.
Because he believed this, and because he worshipped God, he feared no one. He named wrong wherever he saw it and by whomever it was committed. He challenged the systems that demeaned humanity. He could unleash a righteous anger on those – especially the powerful – who inflicted suffering upon those the Bible calls “the least of these, my brothers (and sisters).” And when the perpetrators of evil experienced a true change of heart, he followed the example of his Lord and was willing to forgive.
Desmond Tutu's legacy is moral strength, moral courage and clarity. He felt with the people. In public and alone, he cried because he felt people's pain. And he laughed – no, not just laughed, he cackled with delight when he shared their joy.
In accordance with his instructions, the Church will plan his funeral and other memorial services with the generous support of the South African Government and the City of Cape Town. Details of these events, to be held under South Africa's Covid regulations, will be announced later.
In the meantime, let us prayerfully remember him by the epitaph he once chose for himself:
He laughed,
He cried,
He loved.
In the words of the prayer which his mentor and friend, Archbishop Trevor Huddleston, first composed, and he then adapted as he extended his ministry from South Africa to the world:
God bless our world
Guard our children
Guide our leaders
And give us peace
For Jesus Christ's sake. Amen
May Desmond Mpilo Tutu rest in peace and rise in glory.
God bless you.