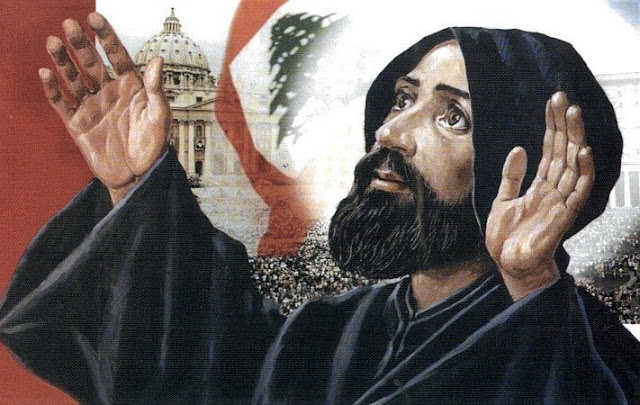 St Nimatullah Youssef Kassab Al-Hardini (1808-1858)
Youssef Kassab Al-Hardini was born in 1808 in Hardin, Lebanon. As a child, he was strongly influenced by the monastic tradition of the Maronite Church. Four of his brothers became priests or monks, and Youssef himself entered the Lebanese Maronite Order in 1828.
The young man began religious life at the monastery of St Anthony in Qozhaya, near the Qadisha (Holy Valley), where he remained for two years until he began his novitiate and was given the name "Nimatullah". During the novitiate, he deepened his life of personal and community prayer and dedicated time to manual labour, while also learning to bind books.
Love for the Blessed Sacrament
Nimatullah was especially noted for his love of the Blessed Sacrament. During his free time - frequently at the sacrifice of sleep - he was often found in the chapel on his knees, arms raised in the form of a cross and eyes fixed on the tabernacle.
On 14 November 1830 he made his religious profession and was sent to the monastery of Sts Cyprian and Justina in Kfifan to study philosophy and theology. On 25 December 1833 he was ordained a priest and became director of the scholasticate and a professor.
During the two civil wars of 1840 and 1845, he suffered greatly with his people. His brother, Fr Elisha, suggested he withdraw to a hermitage, but he replied:  "Those who struggle for virtue in community life will have greater merit".
He observed that the ordinary, everyday life is a continuous martyrdom, since the monk must always be a model to his brother monks, guarding himself from becoming a source of scandal; instead, the hermit lives alone, away from all external temptations.
It was also a decisive moment in his spiritual life, and he offered himself to God for Lebanon and his Order. His motto was:  "The greatest is he that can save his soul", and he would often repeat this to his brother monks.
The "first concern' of a monk
Fr Nimatullah was at times also reprimanded by his superiors for being too hard on himself and too merciful and indulgent towards his brothers. He understood holiness in terms of communion and fraternal charity and is said to have remarked:  "A monk's first concern, night and day, should be not to hurt or trouble his brother monks".
Throughout his life he had a special devotion to the Virgin Mary, his "source of strength". He never tired of repeating her holy name, and carried a special place in his heart for the mystery of the Immaculate Conception (a dogma proclaimed by the Church in 1854). After the Angelus he would often repeat:  "Blessed be the Immaculate Conception of the Blessed Virgin".
In 1845 the Holy See appointed him Assistant General of the order. A man of culture, Fr Nimatullah asked the Superior General to send monks to further their studies at the new college founded by the Jesuits in Ghazir.
A truly humble man of God
He served as Assistant General for two more terms, but refused to be appointed Abbot General:  "Better death than to be appointed Superior General", he is reported as saying.
His reluctance to assume positions of authority in his Order came from his deep humility and his earnest belief that he was far from living in continual contact with God, so necessary to properly serve the monks and the Order. Even when he was Assistant General, he remained humble, refusing to have a special servant accompany him and attend to his personal needs, as was the custom in the Order at the time.
"O Mary, I entrust my soul to you'
In December 1858, while teaching at the monastery of Kfifan, he became gravely ill, a result of the bitter cold in that region. His condition worsened, leading to his death on 14 December. He died holding an icon of the Blessed Virgin and saying:  "O Mary, to you I entrust my soul". He was 50 years old.
When the then Patriarch Boulos Massad heard of Fr Nimatullah's death, he commented:  "Congratulations to this monk who knew how to benefit from his monastic life".
While still alive, Fr Nimatullah was known as the "Saint of Kfifan", a monk who gave himself completely to his brother monks and neighbours during a time of suffering in his Land and difficulty within his Order.
Fr Nimatullah was beatified by Pope John Paul II on 10 May 1998.
Homily of John Paul II
Full Text Source: Vatican.va - Image Source: https://www.facebook.com/MaroniteServants/photos