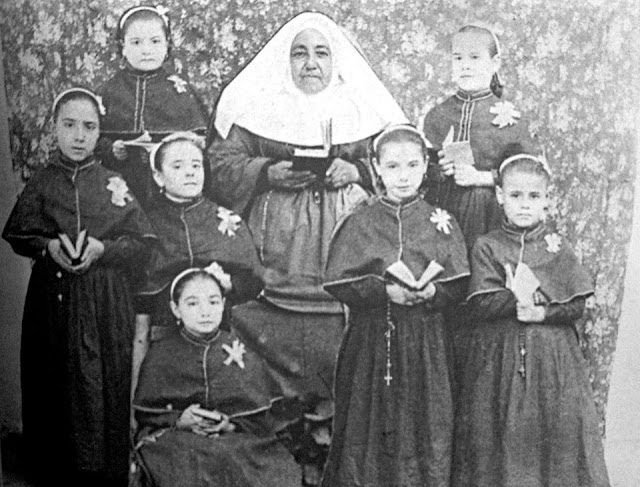 Matilde Téllez Robles was born on 30 May 1841 in Robledillo de la Vera, Spain, the second of four children to Félix Téllez Gómez and Basilea Robles Ruiz. When she was 10, the family moved to Béjar where Matilde attended a private school while also receiving a solid Christian education at home from her parents.
Desire to live for God alone
When Matilde was still very young, she decided to give her life totally and forever to God, with the desire to win over as many hearts as she could for his Kingdom. She devoted much of her time to prayer and to the practice of virtue, and helped the poor and orphaned.
Matilde's father, on the other hand, wanted his daughter to marry and participate in social activities and functions, so he prevented Matilde from making her longed-for visits to church and dramatically reduced her prayer time. However, the young girl's love for God above all earthly pleasures was evident to everyone around her, and it was not long before her father finally consented to Matilde's desire to live for God alone, abandoning the idea that she get married.
The call to be a Foundress
Matilde was strongly assisted in her desire for prayer by the Association of the Daughters of Mary, of which she was later elected president, and she continued to help the poor and sick and to dedicate herself to prayer.
One day while deep in prayer in front of the Blessed Sacrament, Matilde felt called to begin a new religious institute that would be dedicated to Eucharistic Adoration and to helping the needy. Her spiritual director, Fr Manuel de la Oliva, approved this idea and with her father's permission, Matilde began the new foundation together with eight members of the Daughters of Mary.
The first foundation in Béjar
On 19 March 1975, Solemnity of St Joseph, when this group was to "officially" begin their new life together, only one young companion, María Briz, showed up at the house that had been prepared for them in Béjar. Although this was a great trial for Matilde, she placed her trust in God's Providence and did not succumb to discouragement; she instead went ahead with the foundation in Béjar, together with María Briz.
Matilde and María worked with orphaned children, the poor, the sick and shut-ins, and also opened a school for children. At home, their hours were spent in silence and prayer, especially in adoration before the Blessed Sacrament.
Little by little, other young women asked to join them. A new foundation was also offered to them in the Province of Badajoz, where Matilde began a novitiate and opened a school for children, leaving the house in Bèjar.
New Congregation is born
On 19 March 1884, Bishop Pedro Casas y Souto of Plasencia raised the Institute to a Religious Congregation of Diocesan Rite, giving it the name:  "Daughters of Mary, Mother of the Church". On 29 June 1884, Mother Matilde made her religious profession together with some of the other Sisters.
With an outbreak of cholera in 1885, Mother Matilde and her daughters put their lives at the service of the sick and their families. Shortly thereafter, Sr María Briz, Mother Matilde's faithful companion, died of contagion. She was 33 years old.
Expansion, new foundations
Notwithstanding the difficulties, initial hardships and misunderstandings, the new Congregation continued to grow.
In 1889 a new foundation was opened in Cáceres, and others were later opened in Trujillo, Almendralejo, Los Santos de Maimona, Villaverde de Burguilios and again in Béjar.
Mother Matilde attentively looked after the new communities and each one of her daughters with great care, teaching the Sisters complete trust in God's Providence and a sense of responsibility and charity towards the poorest of the poor. She was a "reference point" not only for the Congregation, but also for townspeople and even strangers.
On 15 December 1902, after many years of hard work, deprivation and fatigue, Mother Matilde suffered a stroke. She died two days later, on 17 December, at 61 years of age.
Homily of John Paul II (March 21, 2004)
Image source: https://asociaciontorreisunza.wordpress.com/madre-matilde-tellez-robles/