Saint December 5 : St. Sabbas who Entered a Monastery at Age 8 and became a Hermit - a Founder of Eastern Monasticism 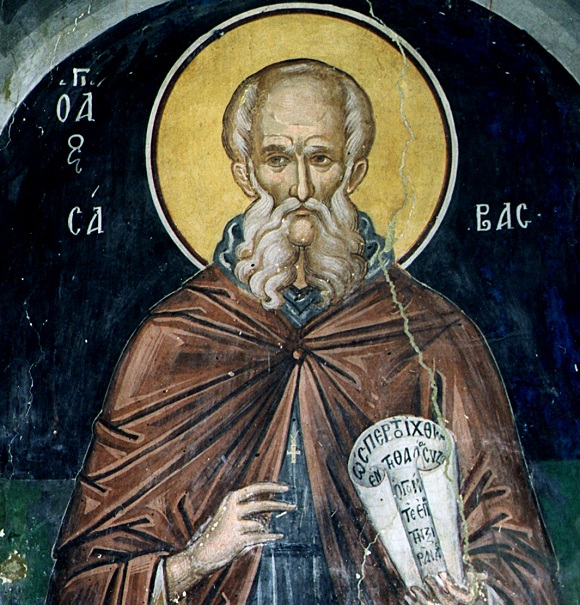 Born:
439 at Motalala, Cappadocia
Died:
532
Hermit, born at Mutalaska near Caesarea in Cappadocia, 439; died in his laura 5 December, 532. He entered a Basilian monastery at the age of eight, came to Jerusalem in 456, lived five years in a cavern as a disciple of St. Euthymius, and, after spending some time in various monasteries, founded (483) the Laura Mar Sabe (restored in 1840) in the gorges of the Cedron, southeast of Jerusalem.
He is one of the most highly regarded patriarchs among the monks of Palestine, and is considered one of the founders of Eastern monasticism.

After an unhappy childhood in which he was abused and ran away several times, Sabas finally sought refuge in a monastery. While family members tried to persuade him to return home, the young boy felt drawn to monastic life. Although the youngest monk in the house, he excelled in virtue.

At age 18 he traveled to Jerusalem, seeking to learn more about living in solitude. Soon he asked to be accepted as a disciple of a well-known local solitary, though initially he was regarded as too young to live completely as a hermit. Initially, Sabas lived in a monastery, where he worked during the day and spent much of the night in prayer. At the age of 30 he was given permission to spend five days each week in a nearby remote cave, engaging in prayer and manual labor in the form of weaving baskets. Following the death of his mentor, Saint Euthymius, Sabas moved farther into the desert near Jericho. There he lived for several years in a cave near the brook Cedron. A rope was his means of access. Wild herbs among the rocks were his food. Occasionally men brought him other food and items, while he had to go a distance for his water.

Some of these men came to him desiring to join him in his solitude. At first he refused. But not long after relenting, his followers swelled to more than 150, all of them living in individual huts grouped around a church, called a laura.

The bishop persuaded a reluctant Sabas, then in his early 50s, to prepare for the priesthood so that he could better serve his monastic community in leadership. While functioning as abbot among a large community of monks, he felt ever called to live the life of a hermit. Throughout each year—consistently in Lent—he left his monks for long periods of time, often to their distress. A group of 60 men left the monastery, settling at a nearby ruined facility. When Sabas learned of the difficulties they were facing, he generously gave them supplies and assisted in the repair of their church.

Over the years Sabas traveled throughout Palestine, preaching the true faith and successfully bringing back many to the Church. At the age of 91, in response to a plea from the Patriarch of Jerusalem, Sabas undertook a journey to Constantinople in conjunction with the Samaritan revolt and its violent repression. He fell ill and soon after his return, died at the monastery at Mar Saba. Today the monastery is still inhabited by monks of the Eastern Orthodox Church, and Saint Sabas is regarded as one of the most noteworthy figures of early monasticism.