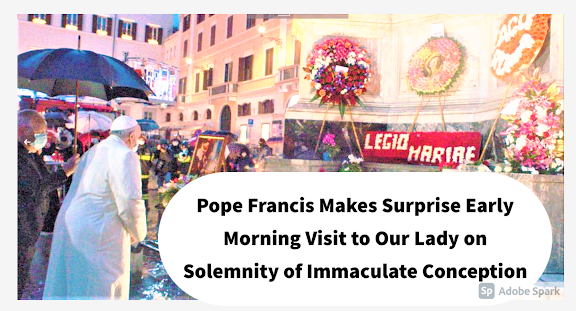 Pope Francis made a surprise early morning visit to Our Lady on the Solemnity of the Immaculate Conception. He prayed for the sick and suffering before Our Lady. The Pope made this private act of veneration to Our Lady on the solemnity of the Immaculate Conception. Vatican News reports that on Wednesday morning, December 8, 2021, just before 6:15 am, Pope Francis went to Piazza di Spagna.
A statement by the Holy See Press Office said that while it was still dark, Pope Francis placed a bouquet of white roses at the base of the column where the statue of the Madonna is, and turned to Our Lady in prayer, asking for her intercession for the miracle of a cure for the many sick and for healing for peoples suffering from wars and the climate crisis.
The Holy Father also prayed for conversion, to melt the hearts of stone of those who build walls to separate themselves from the pain of others. The statement notes that the Pope left Piazza di Spagna around 6:20 am and went to the Basilica of St. Mary Major. There he prayed before the icon of Maria Salus Popoli Romani before returning to the Vatican shortly after 7: 00 am. It had been announced on 27 November that the Pope would not preside over the traditional ceremony at Piazza di Spagna but would make a private act of devotion due to the Covid-19 health crisis. Edited from Vatican News