Terrorist Attack on Catholic Procession in France is Condemned by Interior Minister "The freedom of worship must be able to be exercised in all serenity in our country." 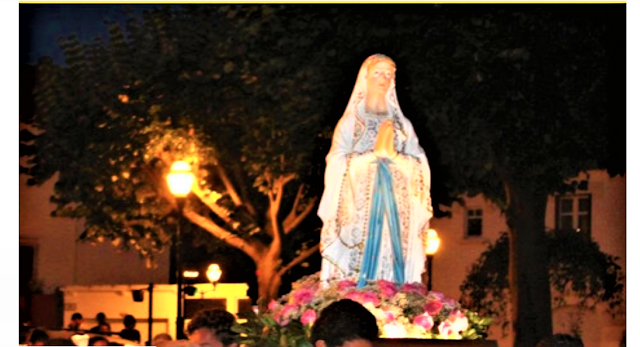 A terrorist attack occurred in Nanterre, France  The violent Islamist attack on a Marian Procession, on December 8th, 2021, involved; torches being stolen from faithful, a priest being spat on and threats to decapitate Catholics in the name of the Quran.
France's Interior Minister, Gérald Darmanin, Tweeted:
"Inadmissible acts. The freedom of worship must be able to be exercised in all serenity in our country. Support for Catholics in France."
Mass in the town is being supervised by police as the threats were similar to events from Normandy and Nice, where a priest and parishioners were decapitated during Mass.
SEE 1:27 Mark on Video Below:
The president of the Muslim Cultural  and Charitable Association wrote:

On December 8, 2021, the Marian procession organized by the Diocese of Nanterre was the victim of insults and violent threats by several people, which required the intervention of the police to ensure the safety of the participants.

No justification allows such reprehensible behavior as this and we know that it is the behavior of a few isolated people who are outside all moral and social rules.

We (members of the Association of Muslims of French Guyana A2CMGF) confirm our support and solidarity with the Catholic faithful of the diocese of Nanterre affected by these misdeeds impossible to understand.

Our fraternal thoughts for the faithful of the diocese of Nanterre and all the Catholics of Guyana and France.