VIDEO of the Miracle of the Liquefaction of the Blood Relic of St. Januarius in the Cathedral in Naples 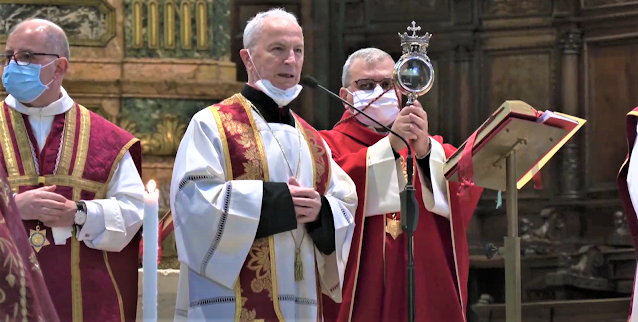 Miracle Liquefaction of the blood relic of St. Januarius in the cathedral.  In Naples the blood miracle of the city saint Januarius (Italian San Gennaro) happened again, however not in the morning. It was thought the miracle might not happen. But after long prayers the blood liquified in the evening. During a solemn ceremony on Thursday evening in the cathedral, the martyr's dried blood, stored in a glass ampoule, liquefied. For centuries, the city patron's blood has been liquefied on September 19 and on two other dates: on the Saturday before the first Sunday in May, the feast of the transfer of the relics to Naples, and on December 16, the day of commemoration of a warning against Vesuvius. Eruption in 1631. The blood miracle has been documented since the Middle Ages. His absence is considered a bad omen by the people of the are. According to tradition, Bishop Januarius was beheaded at the time of the persecution of Christians under the Roman Emperor Diocletian on September 19, 305 in Pozzuoli near Naples.